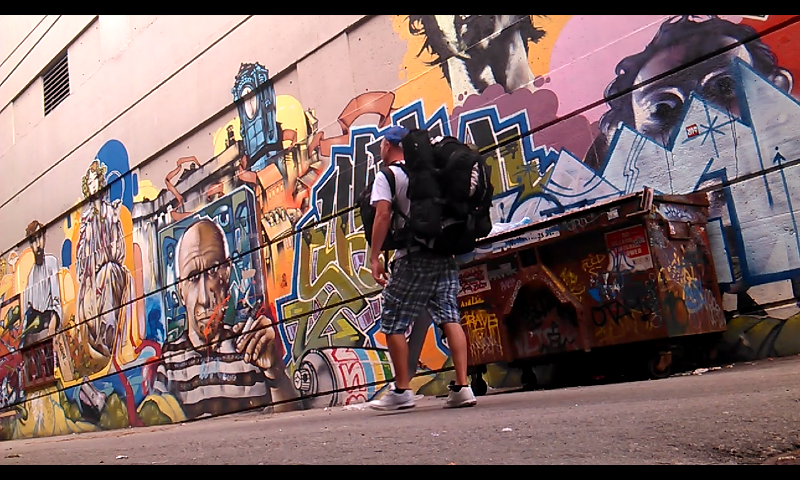 After a few rainy days in Fredericton, New Brunswick, I was on a quest to reach the province of Quebec. So I skateboarded down the on-ramp to put my thumb out on the side of the highway as soon as the rain stopped. At first, it took me about 45 minutes to get picked up but once the ball started rolling I was getting one short ride after another with less than 5 minutes of waiting.

Before sunset, I arrived at an Irving gas station and I decided to toss up my tent in the field behind the building for the night. This would allow me to charge my cell phone using the outdoor plug outlets located behind the Irving before passing out for the evening.

When you wake up in a tent behind a gas station a lot of weird things can go through your head as your brushing your teeth and giving yourself a questionable baby wipe shower. After a few days of hitchhiking, you never even worry whether or not you’ll meet a bunch of cool people because when you’re on the road, meeting cool people is just an everyday thing.

I never knew that the world famous Sabian drum cymbal company was founded and still operating out of a small town in New Brunswick until this really cool drummer gave me a lift and told me all about it. That same drummer dropped me off in a town called Hartland, New Brunswick, which is famous for having the largest covered bridge in the world. A shout out to Devor and Hunter, the two guys who gave me a world class tour of the french fry capital of the world, Lawrenceville, New Brunswick, and all of the surrounding towns and villages. That is where the McCain company was founded and the headquarters are located.

Did you know that 1 out of every 3 french fries in the world is a McCain french fry? Or that McCain sells french fries on every continent of the world with the exception of Antarctica?

The ride that I got from Perth, New Brunswick to Quebec City was amazing. An older couple from Fredericton (and formerly from Poland) were quite possibly the coolest older people that I’ve met so far. On their way to fly out of Quebec City to vacation in Cuba, they insisted on buying me lunch with the argument of “We’re on vacation so you have to let us pay for it”. On top of that, they even drove well past their exit and dropped me off at a huge truck stop just so I would have better luck avoiding local traffic. They were big fans of Benny Hill and were really quite funny. They were just all around great people.

Whenever somebody is nice enough to give me a ride, I always ask him or her if they would like to sign my air mattress cover, and so far every single person has said yes. Each Individual signature represents a kind person and usually a funny story too. All of the names combined, however, create the perfect souvenir that cannot be purchased or given as a gift. The type of keepsake that must be earned and is therefore priceless, truly a one-of-a-kind. Believe me, by the time my journey is over, I most definitely will have earned this one.

Now that I’m in Quebec I’m going to grab a couple beers, camp out, and just reflect on how many great people I’ve been fortunate enough to cross paths with so far. So cheers to all of them and cheers to me for finally reaching Quebec. I can’t wait to see what tomorrow will bring.

That is awesome dude. Keep it up. I can’t wait to read the rest of your adventure. 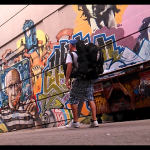