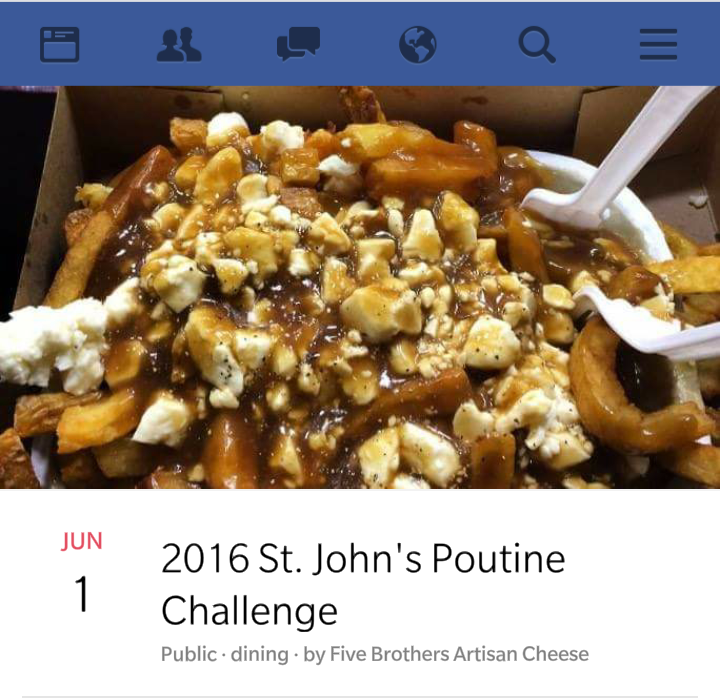 Have you ever watched Survivor and been so sure you would bomb an Immunity challenge the second that Jeff describes the task at hand? For me this happens for pretty much any challenge that involves a puzzle.

Now if the challenge involved the consumption of Canada’s delectable delicacy known as the poutine, I’d be all about it. Actually, that isn’t entirely accurate as I’m super picky and don’t really like trying new things which is why I didn’t partake in the 2015 St. John’s Poutine Challenge.

I had heard about it last year, was excited but turned off when I saw some of the recipes. It was disappointing because at the time I was trying to branch out, try new things and save a crumbling relationship.

On to the next one, it is; the 2016 St. John’s Poutine Challenge started on June 1 and this time around I find myself feeling a little more adventurous.  (I am sort of attributing this to my roommate/bestie who is much more cultured in terms of food and what’s going on around the city).

I have decided to split this article into two parts. The first, talking about the Challenge itself, and the second dealing with the poutines I managed to try within the month. (As I write this I’m up to four and hoping for number five tonight after a long day of work.)

So what is a Poutine Challenge? What is involved in said challenge? Why am I asking so many questions? Basically, eighteen restaurants throughout St. John’s put their own spin on a poutine. The one constant is that each poutine will use Five Brothers Artisan Cheese’s signature “Bergy Bits” cheese curds. For the month of June, the public gets to vote for their favorite on the Five Brothers Facebook page with the official winner being declared on July 1. 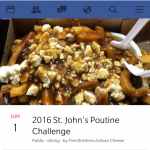 I reached out to Adam from Five Brothers Artisan Cheese, the reason this challenge exists in the first place. The idea of a month-long event throughout the city involving various takes, interpretations, and upgrades on one dish intrigued me.

“I had for a few years now been saying that there needed to a couple food ‘challenges’ in St. John’s as I had seen some in other places and thought it would be a fun thing to do,” he said.

So last June, the Poutine Challenge was born when Five Brothers Artisan Cheese partnered with The Overcast Newspaper and five local restaurants.

“It was a great success and everybody loved it,” said Adam. “This year we wanted to do it again and partnered up with the Restaurant Association of NL and really tried to grow the challenge to get more places (and) people involved and on board with it.”

The Challenge has indeed grown. Five Brothers reached out and they were met with an overwhelming response. Eighteen restaurants signed on, with others being turned away because as Adam said  they “had to cut it off somewhere.”

Five Brothers prides itself on building relationships with local businesses. Adam believes the Poutine Challenge is a great way to help promote and support their brand as well as the restaurants involved. He believes the Challenge is a great opportunity to showcase “the talented chefs we have here and help spread the word about the restaurants and get people out to them.”

He notes that this is an economic downtime and believes that small business owners should be doing their part to stimulate the economy in any way they can.

Adam and Five Brothers are also seemingly quite socially conscious as well. Adam notes that it isn’t just small businesses that feel a pinch during a lull in the economy; charities do as well. One dollar from every poutine sold in all of the eighteen participating restaurants will be donated to the Autism Society of Newfoundland and Labrador.

Adam has worked with the Autism Society before and felt that it would be great to give something back to them at the end of the month.

“Not only do people get to enjoy the poutines that are put before them but also know that a portion of proceeds are going back into a local charity,” he said.

A quick browse through the event, created on Facebook for the Challenge, shows a lot of interest with some people asking for the event to be extended so as to permit more time to try all the poutines.   Adam said there were no plans to extend beyond June but hopes that the St. John’s Poutine Challenge will become an annual event, learning and improving each year on the one before it.

The complete list of restaurants and their unique recipes can be found on the Five Brothers Facebook page. Voting for the winning poutine is also underway.

That’s a nicely made answer to a chalnelging question

Wendy – sounds like a great combo with the chickpea pasta! And next time I’ll try it without draining the spinach. It might depend on how much liquid is in the tomatoes used – we’ll see!CaSaundra, I need to get much better about rotating through favorites! Glad to know there are others out there . . .

You have the monopoly on useful information-aren’t monopolies illegal? 😉

[…] or not I required modifications, (I’ve gotten a lot better than I was before I took part in the poutine challenge, but I’m still a bit picky), the burger’s toppings, cheese (because I love it and I believe it […]

Good Friday: I Know the City Getting Ready – Tint of Ink Reply

[…] after this “exchange” with fish, I ate it again, this time as part of the 2016 St. John’s Poutine Challenge. Magnum & Steins offered a “Fish & Chips Poutine” which sounds exactly like you’d […]

After looking into a few of the articles on your website, I seriously like your way of writing a blog.
I book marked it to my bookmark site list and will be checking back
soon. Take a look at my web site too and let me know your
opinion.

I enjoy, cause I found just what I used to be taking a look for.
You have ended my 4 day long hunt! God Bless you man. Have a great
day. Bye