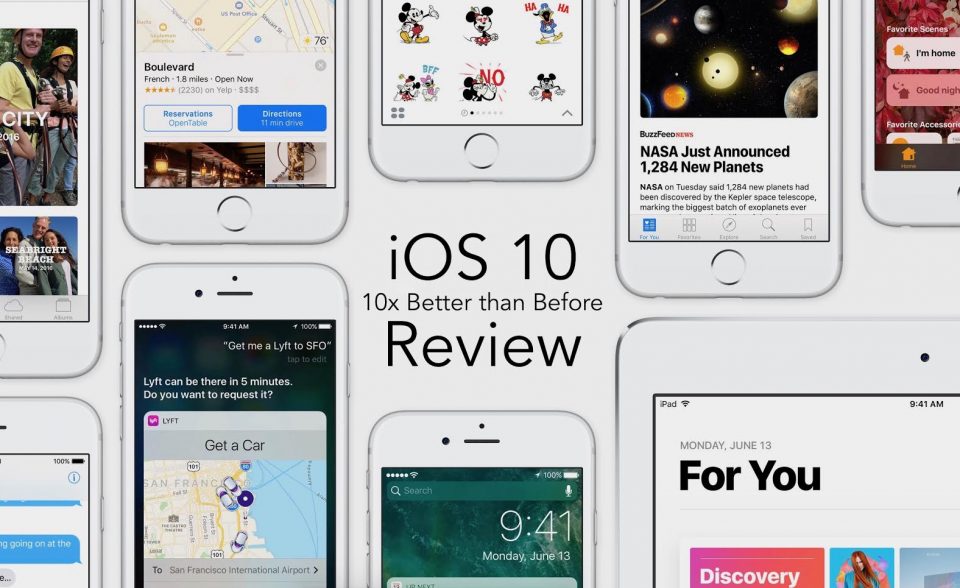 After months of testing all of Apple’s iOS 10 betas on both my iPhone and my iPad Pro, we have finally reached what appears to be the GM beta (the last beta that will be rebranded as the official release). As such, it seems that what we have now is what we’ll get when Apple officially releases iOS 10 to the public on September 7th.

I’m currently running iOS 10 on an iPhone SE  iPhone 6s Plus  and 9.7″ iPad Pro  I will focus primarily on the iPhone experience here, though the experience is largely the same across all iOS devices.

The iPhone SE, essentially an iPhone 6s crammed into a 4 year old iPhone 5s design, offers a great experience in iOS 10. What it lacks in screen resolution and maximizing it’s physical design in comparison to it’s larger brothers, the iPhone 6s and 6s Plus, it picks up in incredible speed and battery life. In fact, the iPhone SE has outlasted my iPhone 6s Plus in regular day-to-day use.

Actions feel insanely quick, offering immediate response times to actions. The “Hey Siri” feature feels much more seamless and intuitive. In the past it would take a while to register what I said, then change my speech to text, which it often would then autocorrect, before finally searching for the answer to my question. Now when I query Siri it immediately pulls up my meaning, registers my intent and answers my question without any delays. Could this be a sign of Apple’s greater focus on machine learning and AI advances at play for future iOS releases?

One thing is for sure, iOS 10 is the first iteration of Apple’s mobile platform that feels like its fully taking advantage of the hardware it runs on.

When Apple first previewed iOS 10 back in June during WWDC – it’s World Wide Developer Conference – one thing was apparent, Apple was moving away from the subtleness it unveiled with iOS 7 and subsequently followed up on with iOS 8 and 9. iOS 10 was going to be bigger and bolder. 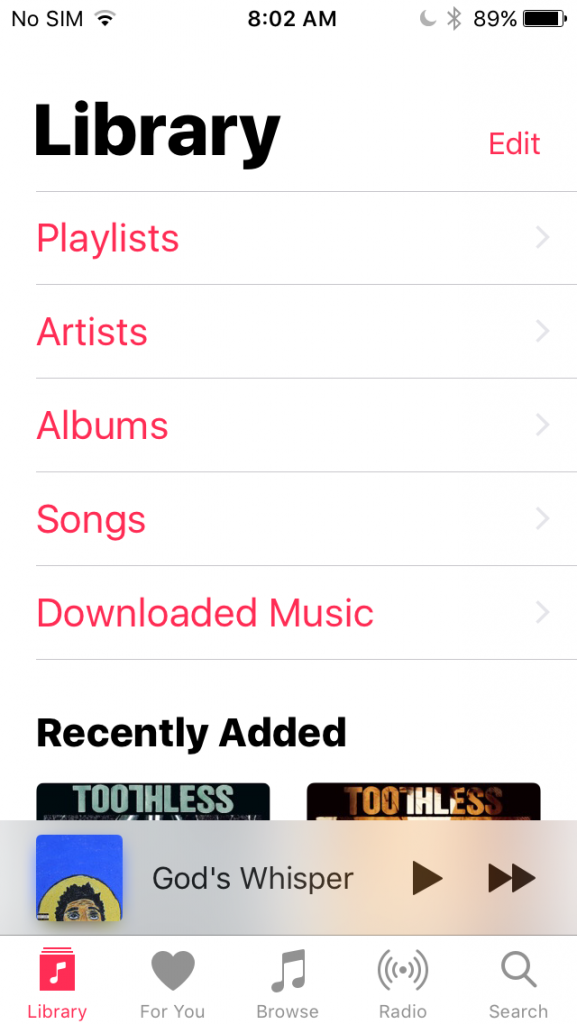 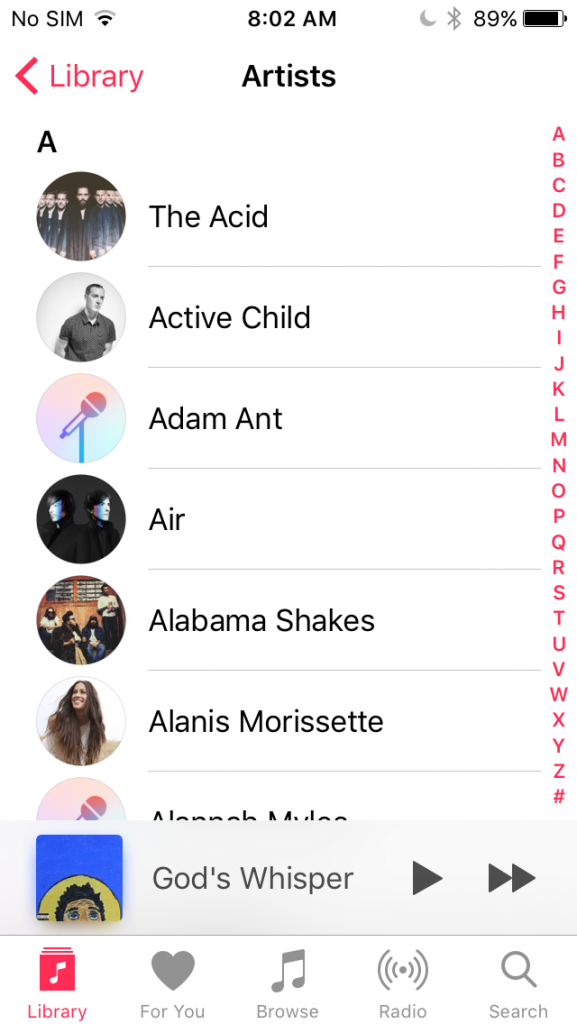 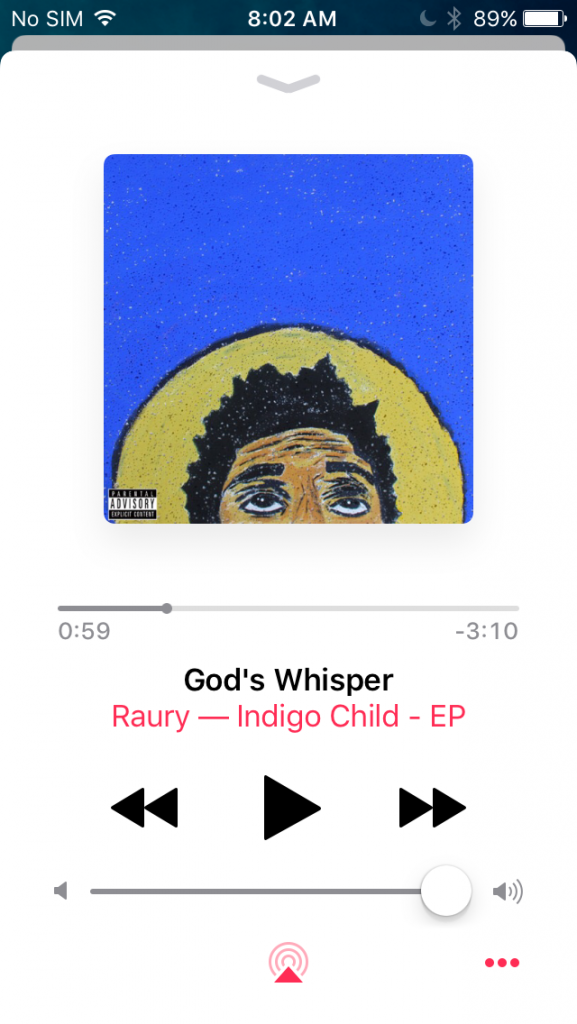 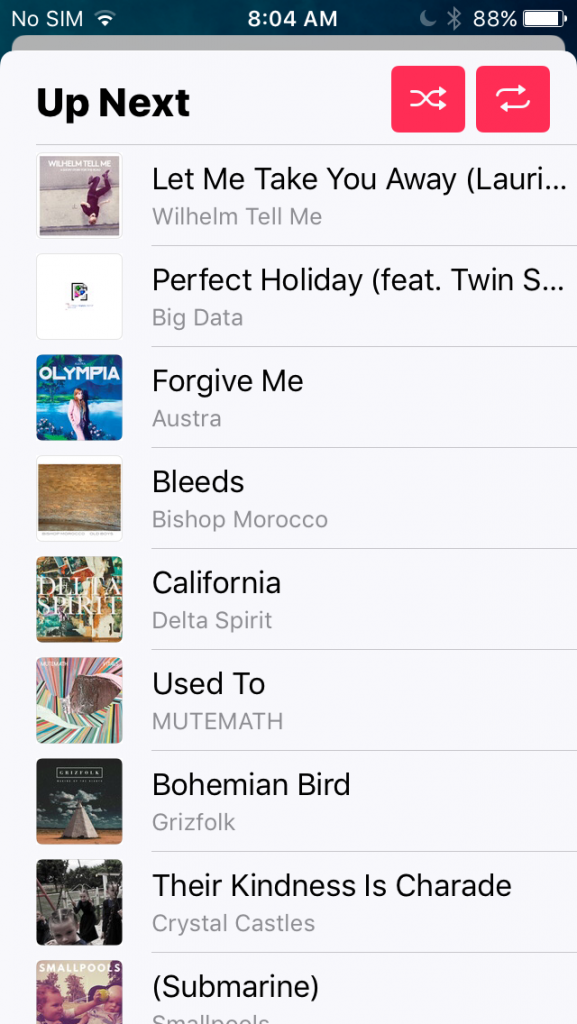 The first, and possibly biggest, update is a totally revamped Apple Music. In it’s first iteration Apple Music lacked clear user intuition. It was almost the antithesis to Apple’s design language – it didn’t just work. It required a lot of poking and prodding to figure out. There was a definite learning curve that came along with the first generation of Apple Music.

Happily, iOS 10 radically redesigns Apple Music with a cleaner UI that features bold text and easier access to the content you’re looking for.

Playing a song in Apple Music, which is much easier now that the main page directs you to your music first, showcases your artwork front and center with all the requisite features at the ready. Just give a little swipe up from your currently playing screen to access features such as shuffle, lyrics and your Up Next list.

Not in the mood for a specific song today? Simply swipe right to left on the specific song to remove it and streamline the songs you want to hear. Back at the now playing screen simply give a swipe down to minimize your song to a panel at the bottom of the screen, allowing you access to the rest of the app, so that you can browse about without losing your context.

Apple Music’s radical update should address most of the pain points that users had been complaining about since it’s inception. 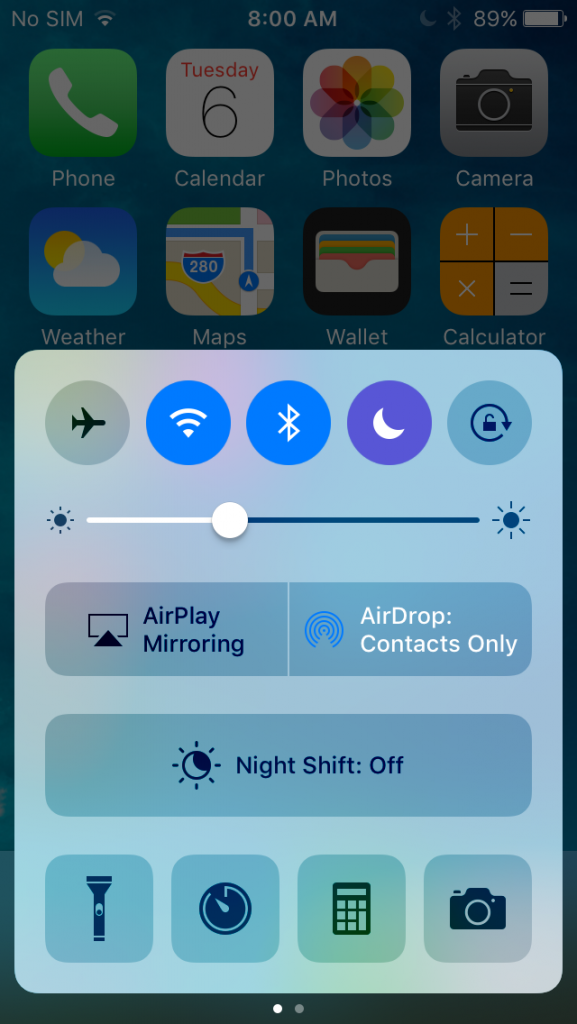 An added bonus for Apple Music is that it gets its own screen in the Control Centre for bigger, easier control of your music experience. Just swipe up to get to Control Centre, then swipe right for the Music screen.

The design of the lock screen also gets a revamp. For 9 years now we’ve all seen the “Swipe to Unlock” prompt on our home screen. When Apple first introduced Touch ID, however, we stopped swiping and simply pressed our home button to unlock our iPhones. So, without much surprise, Apple has changed “Swipe to Unlock” to “Press Home to Unlock”.

While this may seem like simple semantics that aren’t really worth mentioning, it really does change the way you’re used to accessing your iPhone. With Touch ID on Apple’s latest flagships having become so fast you now easily bypass the lock screen and any notifications altogether. Apple’s solution to this problem is the new “raise to wake” feature. Now, simply pick up your iPhone and it will wake the display so you can see the time and access your notifications.

I highly recommend that you tinker with your settings for the home button as soon as you finish upgrading. Under Settings > Display & Brightness, you will want to ensure Raise to Wake is turned on (it should be on by default, but just in case) so that you can more comfortably access your notifications from the lock screen. Also, under Settings > General > Accessibility > Home Button, you’d want to turn on Rest Finger to Open. This allows you the familiar gestures that were default on previous iOS versions. 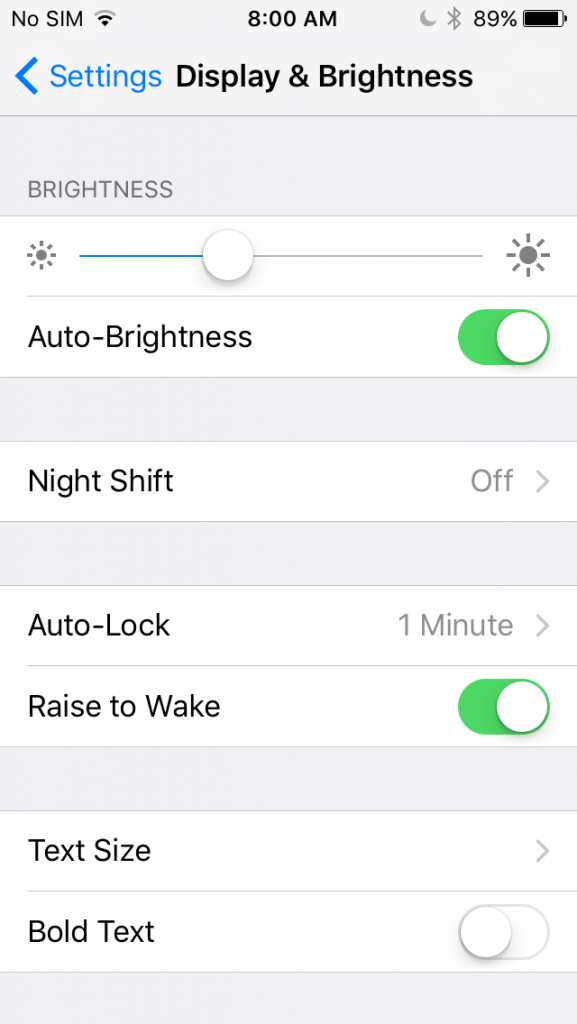 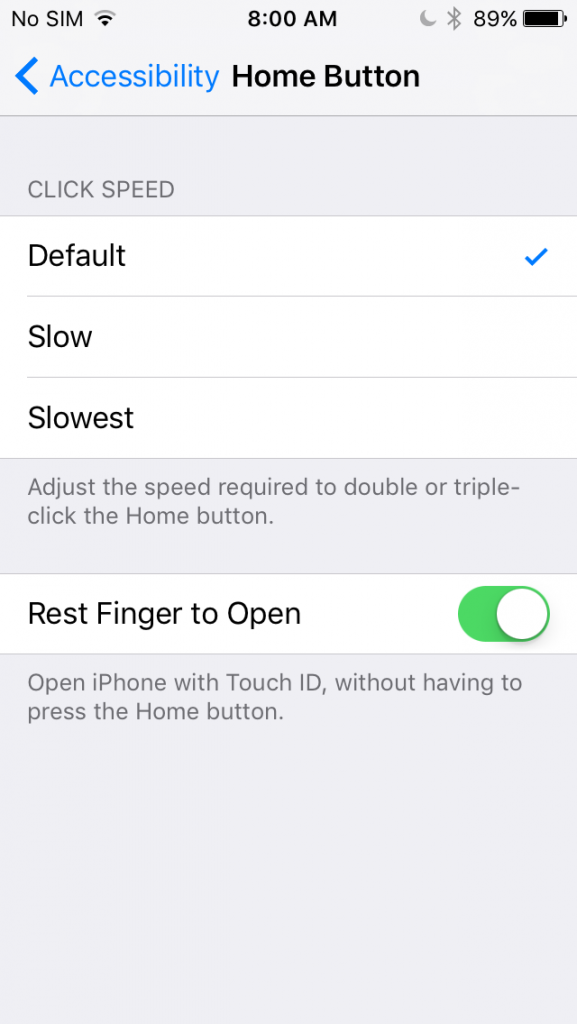 Speaking of Notifications, they also get a major revamp and one that may not grant you as much privacy as before. From the lock screen you swipe from left to right and you get a new widget screen that is totally customizable and features Apple’s new Rich Notifications. You do get to select which apps are able to become widgets, so I would recommend only selecting the apps that you don’t mind anyone having access to. You can customize this page at the bottom of the page by simply clicking edit. 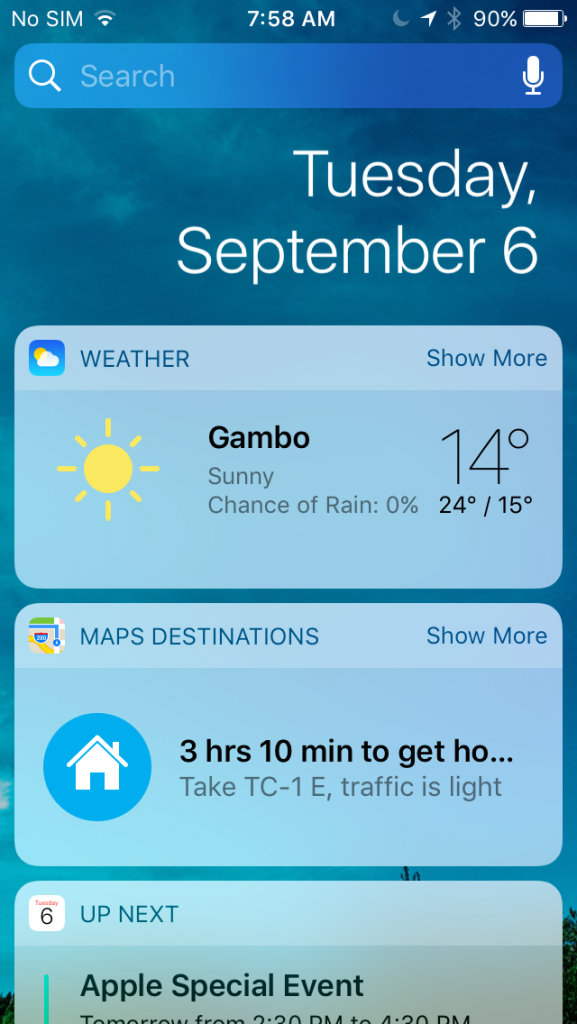 While some people may not like the lack of privacy, I will say that it is a very useful screen. I keep Weather, Maps, and Calendar widgets on mine. With a simple swipe I get detailed weather information, quick destination information, and my upcoming events.

The one cool thing about Maps as a widget is that when you park your car it automatically geotags your location and puts it on the notification screen. It’s handy if you want to know where you’ve parked, which is big for me since I am always forgetting where the car is.

In Messages, Rich Notifications work excellently. Basically, you don’t have to leave the message app any longer to view any contextual information that comes via text. Say, for example, someone sends you a YouTube link. Instead of having to press a link, open YouTube, and wonder what someone has sent you to watch you now get a preview within your text. And when you click on it you can watch it inline right in the message. When it’s done you are right where you left off. Same goes for photos and map locations, among other things.

Messages gets another overhaul that I think most people are going to love. For all you emoji lovers out there, Messages now suggests emojis that are within context of your conversation in the autocorrect bar. Not only that, but once you’ve written your text you can click the emoji button and it will highlight all words found in your text that there is an emoji equivalent for. You simply touch the highlighted word and the emoji is presented for you to select if you wish to change out the word for the emoji. I found this feature incredibly convenient. Instead of scrolling through endless emojis to get to the one I want, I just type a word that I know is associated with it and select it to replace the word. 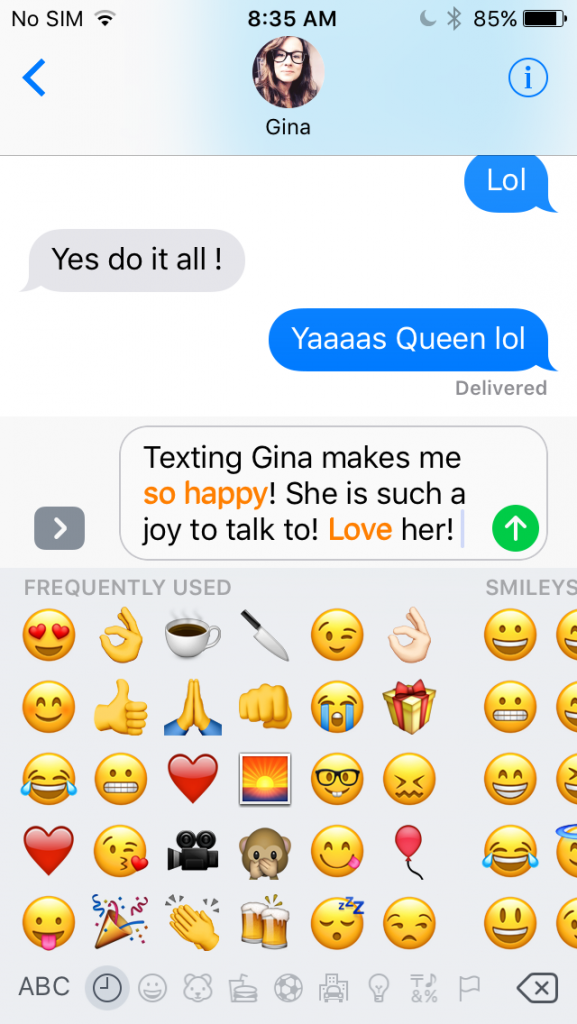 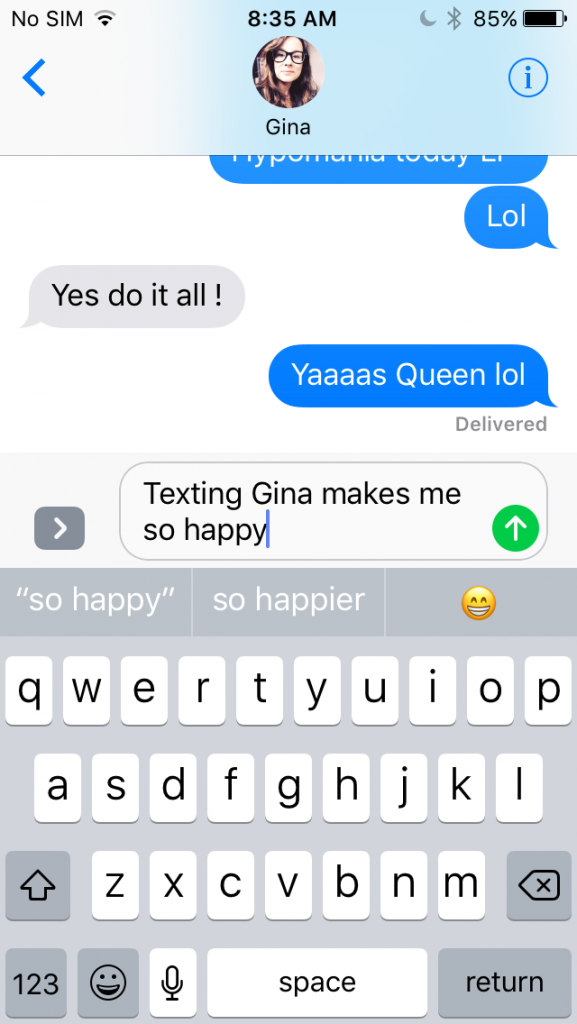 And that’s not all! The traditional “SEND” is replaced with an up arrow. When you’re ready to send, you can hold it down and get new options for sending your messages. For example, if you really want to get someone’s attention you can select the slam option. When someone receives your text they’ll get a big, bold version of your text that then slams inline like a regular text. It’s very eye grabbing. There are many other options as well. Definitely something you’ll want to check out when you start sending your first texts on iOS 10. 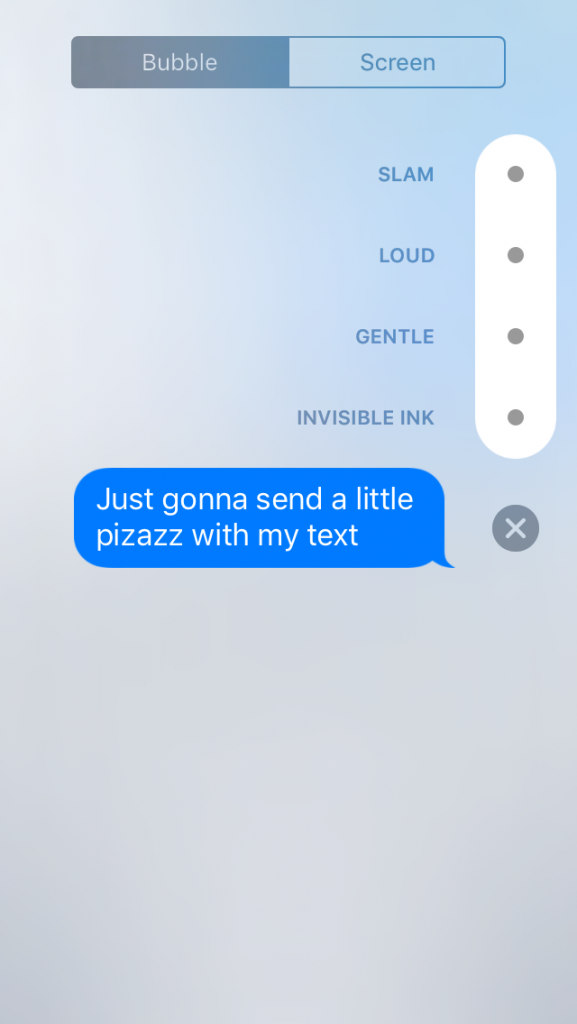 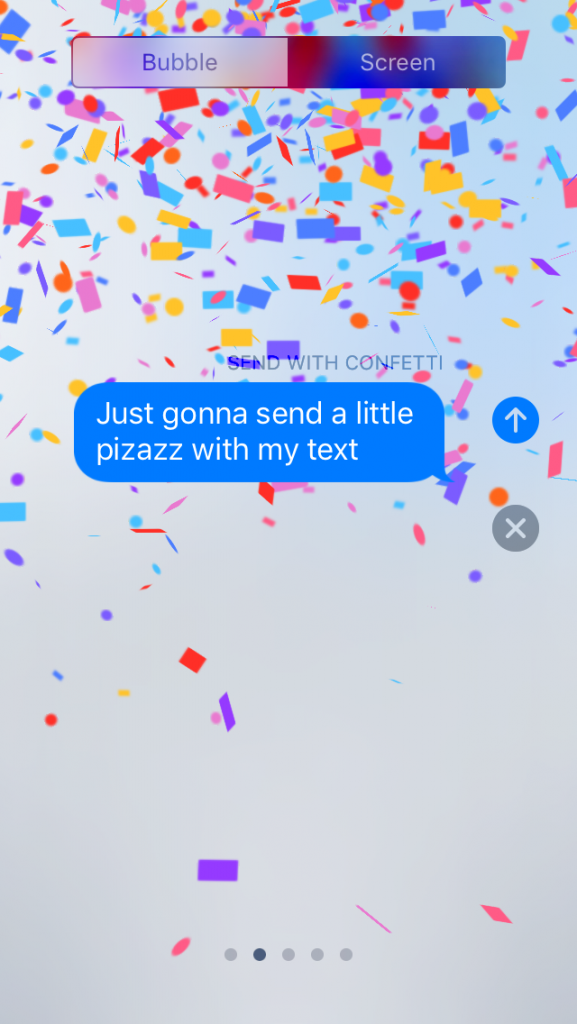 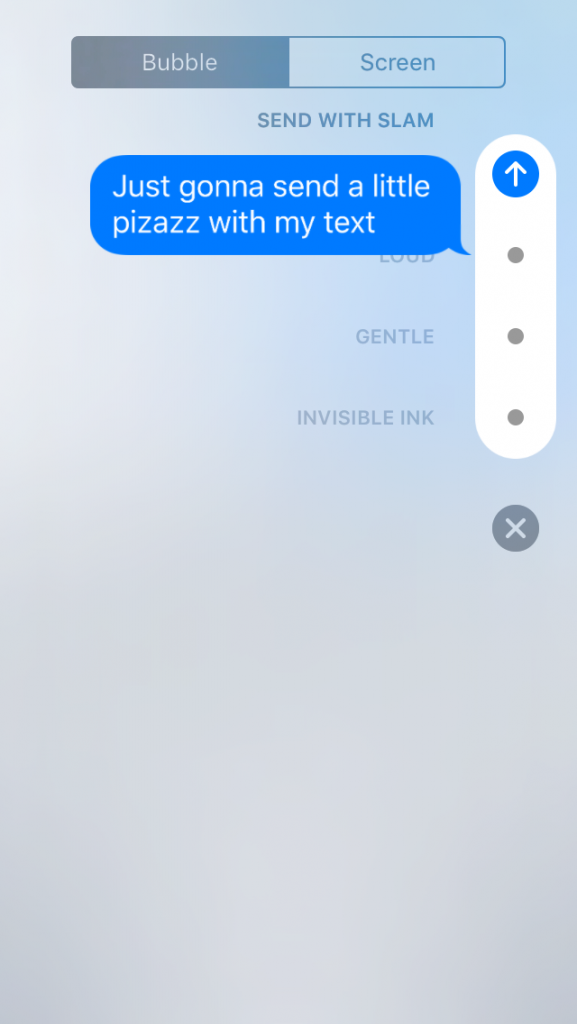 Other little shortcuts have been added when you are typing in Messages and other apps that you’ll definitely appreciate. If you have to input your email, for example, the autocorrect bar above the keyboard will display your email address in full that you can enter with one tap.

OTHER REFINEMENTS
One of the most long awaiting changes is finally here. You now, finally, have the ability to delete stock apps that you don’t need – such as compass, stocks, watch, and even apps like Mail and Calendar. But don’t worry you can always re-download them from the App Store if you change your mind. One great thing about thins that you can download whatever apps you prefer to replace stock apps. For example, you can download the superior mail application Outlook for iOS and make it the default mail app. 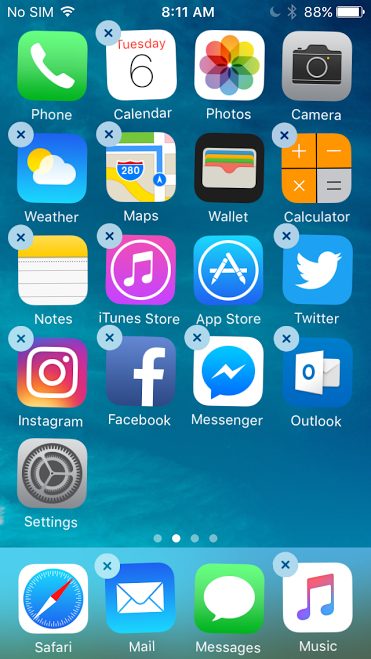 Other little added changes you’ll notice that aren’t huge overhauls to how you use your device are the sounds across iOS. The keyboard clicks, which includes typing, the space bar, and back key, all have new sounds. It’s more like a pop sound as opposed to the old typewriter clicking. It may be a minuscule change, but it’s one I do prefer.

And Siri, as I mentioned earlier, has become much faster and ultimately more useful. Now you can command Siri to open specific apps for you, including third party apps. You can even ask more contextualized commands, such as, “Hey Siri, show me pictures of sunsets”, in which Siri pulls up your photos app and groups pictures of sunsets together for you. 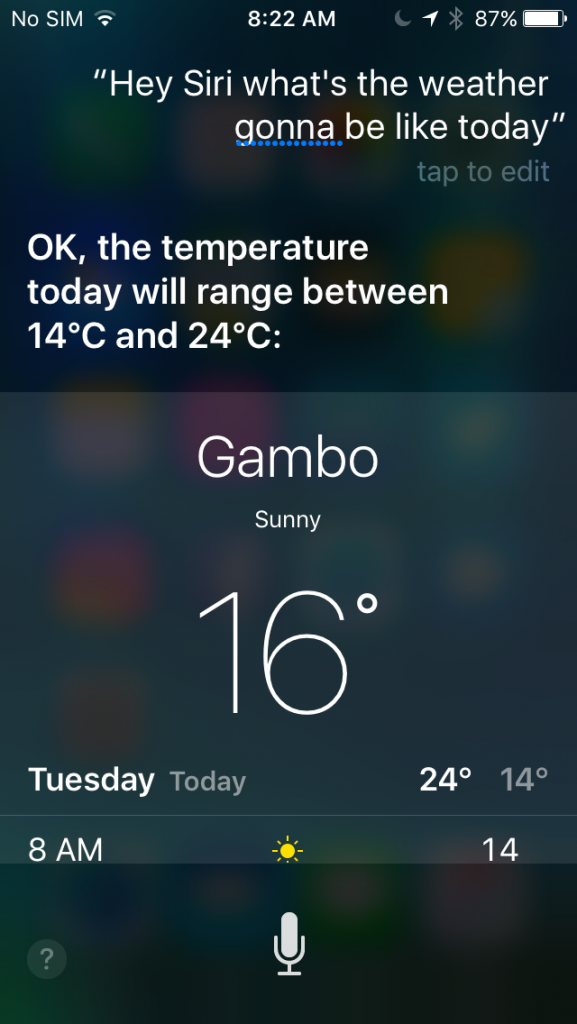 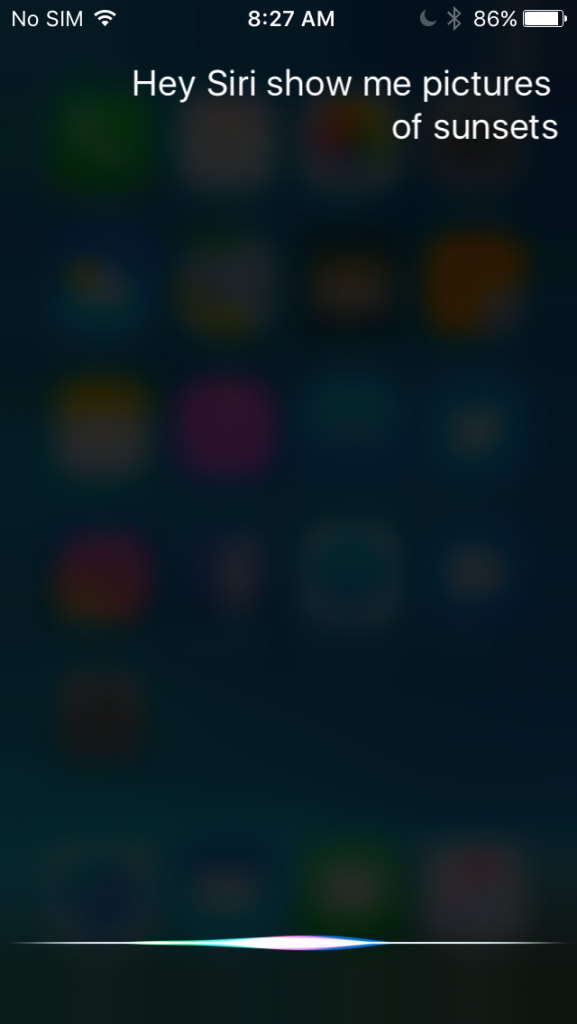 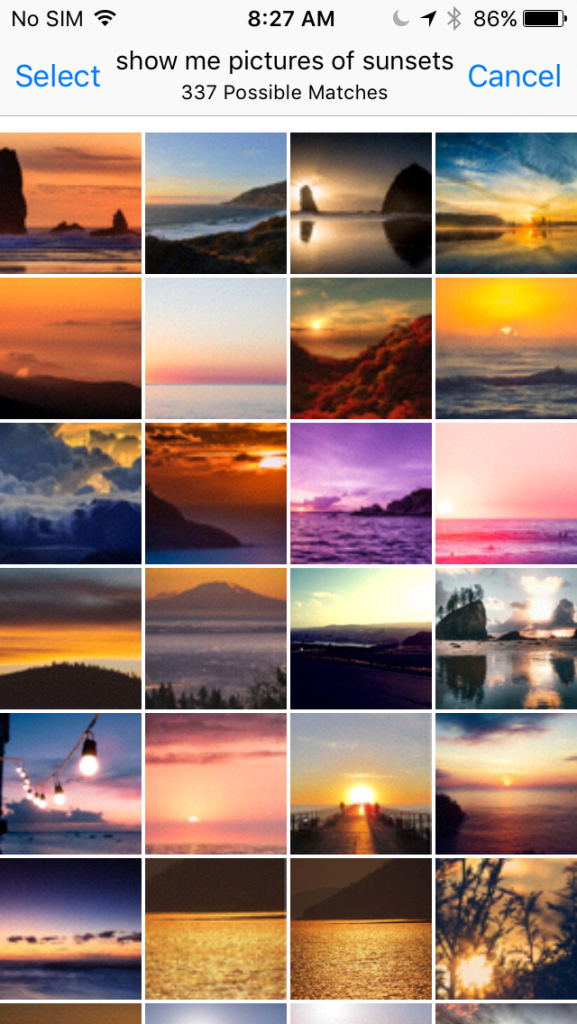 iOS 10 is a bold move in Apple’s user interface. It’s meant to simplify things that you didn’t even know needed to be simplified. It’s bigger, bolder typography is meant to stand out and make the function of it’s apps plain to see.

At first glance it’s a step away from the elegant design that Apple first introduced in the radically overhauled iOS 7. But upon further inspection it’s added a little personality to Apple’s seemingly bland UI. For all the nips, tucks, and practical utility improvements, it’s definitely a bigger release than it first appears to be.

iOS 10 is a worthwhile update that delivers convenience, speed, and simplicity while adding a little fun.

iOS 10 will be compatible with the following devices:

Apple should be making iOS 10 available following their live Special Event on Wednesday, September 7th  And if you want to rock the latest generation devices you can expect Apple to announce pre-orders for the iPhone 7 and iPhone 7 Plus starting Friday, September 9th. 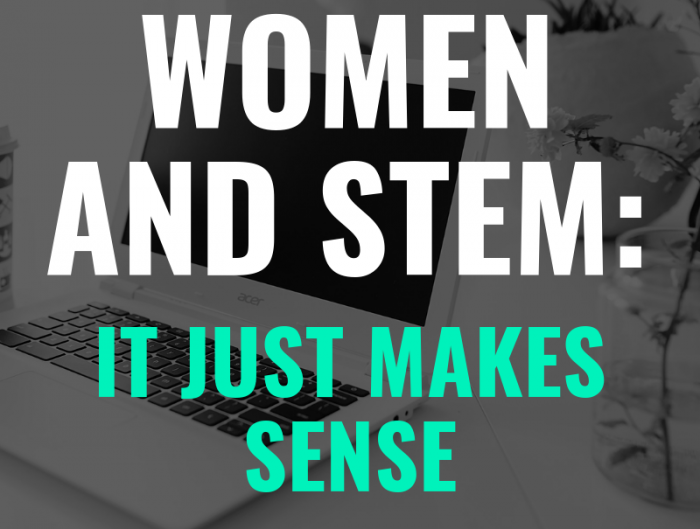 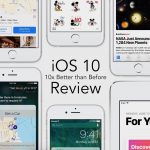