What happens when you combine three amazing artists for an evening to support the production of an upcoming short film? Well quite simply, an awesome night that helps a great cause.

This Tuesday Green & Gold, Everglow and Jerry Stamp are banding together to perform in support of Waiting Outside, a short-film co-produced by Ruth Lawrence and Joshua Jamieson inspired by a poem written by Carmelita McGrath from her book Escape Valocity.

Waiting Outside tells the story of a single dad fighting for his life as he tries to enrich every day he has with his young son and will feature Brad Gover, Darryl Couch and Rozalin McPhail.

Joshua Jamieson penned the adapted script and will direct the short and Tint had the opportunity to have a quick chat with him about the awesome concert this Tuesday.

Q: Tell me about the concert and what we can expect to see?

A: So Ruth and I came up with the idea of doing a variety show in one of our initial pre-production meetings where we were discussing how to secure and raise the $35,000 or so needed to bring this film to life. Between us both, we knew a number of fantastically talented musicians and stage performers in the city and we decided to put something together.

It took a week or so to reach out to various acts and see if they were first – available, and second, interested in the project enough to want to support its creation by taking part in the show.  We found everyone wanted to be involved, but some were just coming off a tour or going into recording. I think we’re super fortunate with the line up we arranged, and we’re incredibly thankful to the bands, Green & Gold and Everglow, as well as Jerry Stamp, who have come together for our event.

Being artists ourselves, and knowing the frustration that comes when being asked to give away what you create for free, I offered to give the performers filming services in some shape or form – trading our skill sets to help one another advance our individual goals. I’ve also gotten support from lots of people who are much more used to creating a live music show than I am like Tony Murray and Adrian Collins, who’ve been fantastic for advice and assistance.

Q: What is the film about and how did the idea come to light?

A: The idea to create this short had its seeds sewn after the 2013 BMO Winterset public reading event at The Rooms last year. My day job is with the Newfoundland and Labrador Arts Council where I’m the Communications Officer. The NLAC is responsible for managing the literary award and a big part of what I do each spring is the prep and promotional work for the events related to it. As a result I often read the books that the jury selects as finalists, and in that year Carmelita McGrath’s Escape Velocity was one of them.

Carm edited my grandfather’s memoirs and has been a longtime family friend. During the reception, I approached her about one of the poems she had read during the public readings that had affected me deeply.  The poem was written beautifully and created vivid scenes in my head that I felt would translate to film exceptionally well. I asked her if she would be up for working with me to create a short film that was inspired by the piece.  She gave me her blessing and committed to being a creative consulting, offering to help me get the option agreement (permission to proceed) from her publisher, Goose Lane Editions.

That happened, and I embarked on adapting the original poem to a 10 page script – my first original script for film, which was a daunting and exciting exercise. I’ve been fortunate enough to have mentors to bounce things off of, including my co-producer Ruth Lawrence, and award winning producer/director/writer Gia Milani who recently did All The Wrong Reasons.

The poem itself focuses on one scene where a woman observes a man across a waiting room. Both are strangers to one another, and the woman just watches what the man does before he’s called in for his appointment. She notices him fumbling through magazines and a mail in card for info on a luxury vehicle falls out, which he then fills out.  When his name is called, he returns the completed card to the magazine, so you never know why he bothered to fill it out, or why he returned it to the magazine.

It made me think a lot about how much we observe other people who we don’t even know, and how we draw conclusions about them despite not having any of our observations ever confirmed. It was in my conversations with Carm after the fact that I learned she had actually written that poem while waiting for someone in a waiting room of a cancer care facility. When I heard that I got goose bumps because it created and even deeper story and level to the man being observed in the poem, so I wanted to create the back story and show the life of that man before getting to that part.

Personally for me knowing the environment that inspired Carm also resonated. I myself had a cancer scare years ago but luckily found out after months on end of tests that I was safe. My mother also faced a cancer risk a couple of years ago, and a very, very close friend whom I call an Aunt honorarily just finished a tough fought 12 month battle with cancer that she is winning. So many people face it or are touched by it, experiencing a gamut of emotions and having to deal with whatever fallout remains, and that’s an important conversation to have.

Q: Who is working on the film?

A: Ruth Lawrence is co-producing with me, and I’ve looked forward to the opportunity to work with her for many years. We’ve been friends for quite some time, and have compatible personalities and approaches to developing creative so it’s a dream come true for me.  Brad Gover is also involved in the project, he is part of the upcoming adaptation of Chad Pelley’s book Away From Everywhere and did Sister Morphine.  Brad was a camera man for my last full-length documentary Just Himself: the story of Don Jamieson, and I loved working with him on set so I was hopeful he’d return for this project, which he has in the role of cinematographer.  Another person who worked on my previous film is Darryl Couch who edited my doc.  Darryl has great experience in that realm and was a master with helping me cut to the core for the doc so I wanted his skills for this project too. He’s also a fantastic special effects artist, having worked on shows like Republic of Doyle and Jordan Canning’s short film Not Over Easy, so given the rotoscope animation aspect I built into the script, I thought he’d be great to cover that work as well. For the scoring of this short film project, 2015 ECMA nominated Rozalind MacPhail is on board. We really got to know one another while she was working on the production and promotion of her Head First project, and I thought her music would fit well with what was envisioned for Waiting Outside. 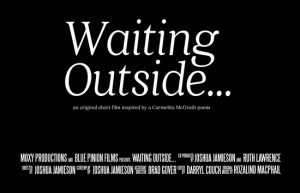 Q: When are you expecting it out?

A: We’re in the process of raising the production funds required now and that will continue until mid-June or sooner. But we’re looking at shooting the film in the fall of this year because I really want certain opening scenes of it to have that sort of feel.  I think the season and that time of year will add another layer to the story through the look and feel of the short film.  We’ll be shooting the film in St. John’s and then moving into post-production, so hopefully we will have a finished piece in October 2015 sometime.

Q: What can people expect to see at the concert?

A: The concert has a great line up and features a variety of different music styles and sounds so there’s something in it for everyone.  Green & Gold are a great band with lots of energy, who are known for their live performances. We also have strong up ‘n comers Everglow who just recently put out a debut record and have a couple of fantastically produced lyric videos. And, the incomparable Jerry Stamp who I’ve had the pleasure of calling a friend for many years. My best friend introduced me to his music many moons ago because it was relentlessly played in her car, and she eventually introduced us. I can’t say enough kind words about Jerry and his talents and I’m excited to have him be a part of the show, so soon after he too released a new record.

All of the bands will have their music available at the show, so when people inevitably love what they hear, they can pick up albums on the way out and support the performers directly.  Also, the Canadian Cancer Society-NL wrote me a beautiful letter to support the production of the short film saying they felt “the film will present a realistic life situation through its main characters and will further support and encourage an important public dialogue surrounding the circumstances and challenges those living with cancer may face.”  So to that end, because of our relationship with them and it’s tie-in to the subject matter along with the fact that our show is taking place during Daffodil Week, it only made sense to also have them present at the show with their bouquets. 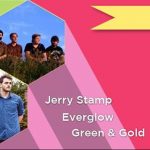