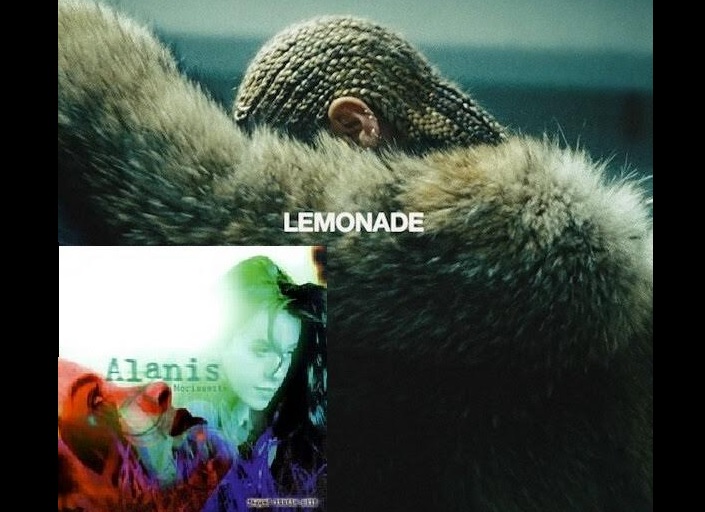 On Saturday April 16, Beyoncé released a teaser video online for something called Lemonade. Whatever Lemonade was, it would debut the following Saturday on HBO. Was it a new song and accompanying video? An album announcement? The Beyhive was buzzing. Queen Bey started her Formation world tour on April 27th so whatever Lemonade was, it was going to be big. I sort of figured this might be a new music video or maybe it was an entire album. With a name like Lemonade, I expected something summery; you know when you listen to a song or an album and you think “This sounds like summer.”? What we got was something that certainly quenched our thirst; an entire album with an accompanying long-form music video, but summery and “fun” it was not. Lemonade is all about life giving you less than desirable outcomes and making the best out of them. There is a lot of hurt and anger on this album and on my third listen I had the realization that Lemonade was Beyoncé’s Jagged Little Pill.

Don’t get me wrong; Jagged Little Pill and Lemonade sound very different sonically but what they do have in common is their rawness and emotion. That is what makes both Jagged Little Pill and Lemonade so relatable. Both Alanis Morissette and Beyoncé come from a place of hurt, anger, and sometimes hopefulness on both their respective albums and these are emotions we have all felt.

Lemonade and Jagged Little Pill both open with a thesis statement.  “Pray You Catch Me” and “All I Really Want” are both about women laying it all on the line. Alanis’ opening track is a little more confident and defiant, however, while Beyoncé is a little unsure of what is happening around her but she knows she wants the truth.

Next up on Lemonade is “Hold Up”. Queen Bey is still a little unsure at the beginning of the song but much more confident in the video as she struts down the street, baseball bat in hand and causing all kinds of damage. By the end of the song she has faced the truth and is feeling more confident. This reminds me of “Hand In My Pocket”. On this track, Alanis sings about the things that are wrong in her life. At the end, though she sings “And what it all comes down to my friends/Is that everything’s just fine fine fine…” Beyoncé ends “Hold Up” on a similarly positive note with the line “I hop up out the bed and get my swag on/I look in the mirror, say, “What’s up?”

“You Oughta Know” is definitely a standout track on Jagged Little Pill and you can certainly sum up the theme of this song with the age-old adage “hell hath no fury like a woman scorned”. Two songs from Lemonade match the fury of “You Oughta Know”. The first is “Don’t Hurt Yourself” featuring Jack White. This might be Beyonce’s angriest and hardest song yet. “Who the f*ck do you think I am?/You ain’t married to no average b*tch boy…” she shouts at the beginning before concluding with “If you try this sh*t again/You gonna lose your wife…”. This song matches the fury on “You Oughta Know”. Perhaps the most famous or infamous line in that song is the part about performing a certain act in a theatre. There is a now famous line in Beyoncé’s song “Sorry” where she calls out “Becky with the good hair” which has led to a ton of Internet reaction.

Next up on Lemonade is “6 Inch” featuring The Weeknd; a song about defiance and persevering and doing things for yourself. “Oh baby you know, she got them commas and them decimals/She don’t gotta give it up cause she professional…” reminds me of Alanis’ line in “Right Through You” where she sings “Now that I’m Miss Thing/Now that I’m a zillionaire/You scan the credits for your name/And wonder why it’s not there…” to the person who tried to take credit for her success but didn’t care much about her.

Skipping over “Daddy Lessons” as I don’t think there is a good Jagged Little Pill match we have “Love Drought”. Here Beyoncé deals with not being able to measure up to expectations whether they have been placed on her or she placed on herself. She sings “But you my lifeline, think you tryna kill me?/If I wasn’t B, would you still feel me?/Like on my worst day? Or am I not thirsty, enough?” This theme is also evident on Alanis’ “Perfect”.

I feel that “Sandcastles” and “Forward” featuring James Blake don’t have direct matches to tracks on Jagged Little Pill but they are both full of the raw emotion found throughout Alanis’ album. Next up on Lemonade is “Freedom” featuring Kendrick Lamar which is perhaps the most political song Beyoncé has ever done. This is an uplifting and powerful song that deals with racial strife. Images of breaking chains and getting through storms are presented in the lyrics and Lamar’s verse touches on racism and police brutality. Obviously, Alanis Morissette has not dealt with these things but she sings about growing up in the Catholic Church and the guilt and the rules and rituals associated. Both of these songs are very unique and personal accounts of things both singers have gone through in their lives.

After “Freedom” and an audio clip of JAY Z’s grandmother’s speech from her ninetieth birthday about life giving her lemons so she made lemonade, we get “All Night”. By this point on Lemonade, Beyoncé seems to not so angry anymore and is willing to forgive. She sings “And my torturer became a remedy …” This is a song about hopeful love and unconditional love which goes exactly with Alanis’ “Head Over Feet”. In this song, Alanis has found someone who loves her and despite her reservations and dismissal attempts she too has fallen.

Lemonade ends with what may have become (and is certainly my most played) Beyoncé song “Formation” (I love it for more than just the line about hot sauce too). This is the song that kicked off “activist Bey” with the Hurricane Katrina and Black Lives Matter visuals appearing in the video and Queen Bey confidently proclaiming her love for the way she looks and where she came from. The song ends with a call to action. “Okay ladies, now let’s get in formation, cause I slay…” while Alanis does the same thing at the end of “Wake Up” singing “get up get up get up off of it/wake up”.

Tracks from Jagged Little Pill like “You Learn”, “Mary Jane” “Ironic” and “Not The Doctor” don’t necessarily match up directly (or at least in my opinion) with some of the songs on Lemonade but as I said both albums are full of raw and relatable emotion. I have to wonder when Beyoncé was in the beginning stages of recording Lemonade was she inspired by the themes and relatability of Jagged Little Pill? Did she hope to take something very personal and share it with the world and hope that people could relate? This wouldn’t be the first time that Beyoncé has been inspired or influenced by Alanis as she performed a medley of “If I Were A Boy” and “You Oughta Know” back on the I Am…World Tour that you can check out here.

[…] makes this list must be exactly what Sophie’s Choice must feel like. I love this woman and Jagged Little Pill is one of my all-time favorite albums. I decided to go with “You Learn” because, if I […] 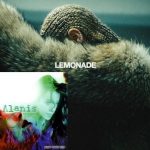