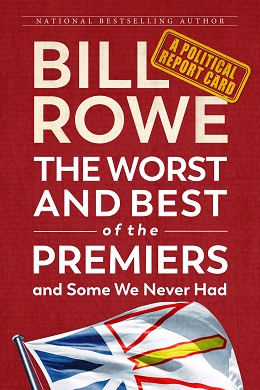 When it comes to Premiers, Newfoundlander and Labradorians are loud in their opinions whether it be proud or infuriated or otherwise, we all have something to say about those who sat in office. From out protests for Dwight Ball to step down to our “Clyde lied” slogan to our admiration and worship of Danny Williams- our views are passionate and obvious for every single premier to step foot in the Confederation Building.

As much as we have to say, it’s not always backed with all the information. My favourite and most knowledgeable political “advisor” is the one and only, Bill Rowe. His opinion has the most validity and it’s easy to hang onto his every word.

In Rowe’s The Worst and Best of the Premiers and Some we Never Had, two premiers had a high ranking of 85 percent for his top contenders, Joey Smallwood and John Crosbie. Though Rowe’s opinion may be biased (isn’t an opinion supposed to do just that?), it’s one of the most entertaining and well-informed reviews of the province’s Premiers, and also those who could have been.

Rowe’s book plays out like a witty conversation, though one sided, it’s like listening in on a great discussion about the many people involved in Newfoundland politics since Confederation. It’s a frank, blunt and realistic report on those who served the province and those who almost had.

With the provincial election in the near-ish future, and a bleak economic situation at hand, an entertaining review of our past may help the public decide it’s future.

For a witty, historically accurate and realistic insight on the political history of our province, and who help shape what it is today, pick up a copy of Rowe’s Report Card.