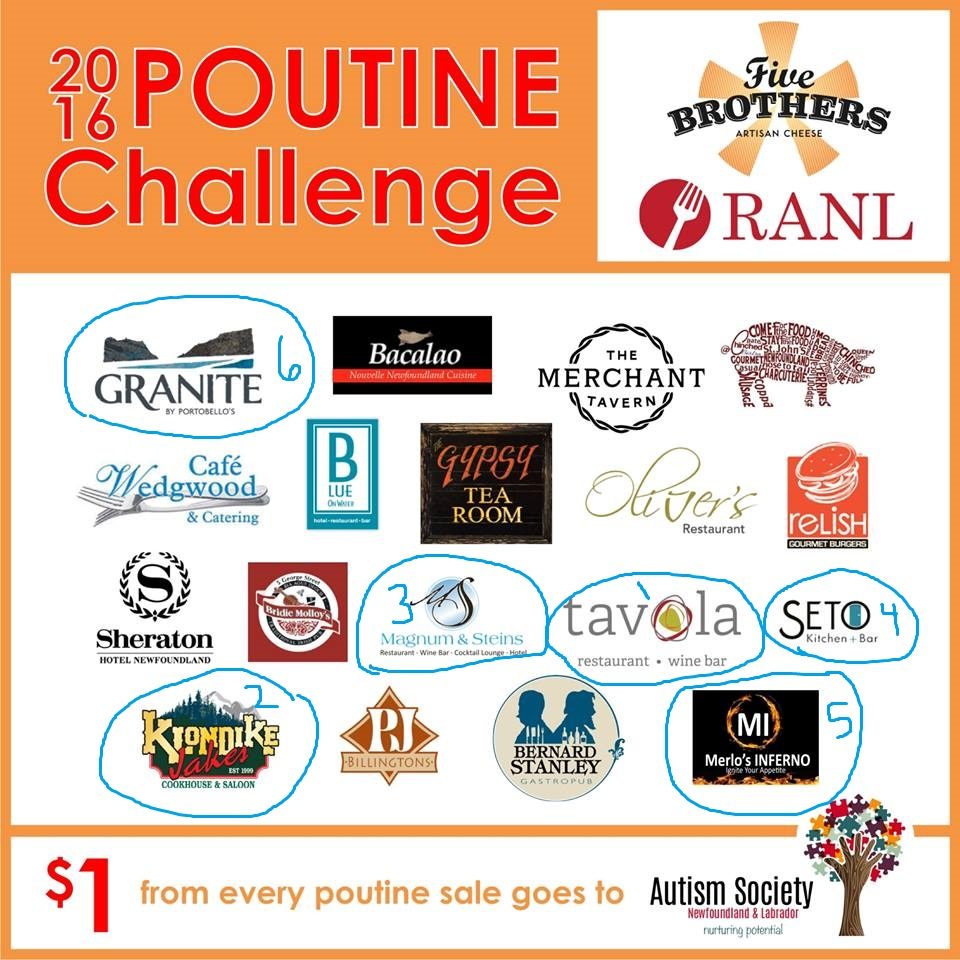 June has come and gone meaning that the 2016 St. John’s Poutine Challenge has wrapped up. Last month I put on my journalist hat (backward snapback of course) and wrote an article where I talked about the challenge and interviewed Adam from Five Brothers Artisan Cheese so hopefully you got out and tried one or two.

I certainly got out and tried one or two…or six. I sort of wish I had a novelty shirt that reads “I did it all for the poutine” to have worn during my outings. So yes, I managed to try six out of the eighteen poutines (my roommate/bestie managed to squeeze one more in; we no longer live together).

If anyone knows me they know that I’m very passionate about politics and voting so it comes with great embarrassment to say that I actually forgot to vote in the challenge before the end of the month. I’ll go hang my head in shame while you read about the six poutines I tried.

1. Tavola: We kicked off the 2016 Poutine Challenge with a visit to Tavola. Their offering was the “Georgia BBQ Poutine” which consisted of smoked pork shoulder, baked beans, creamed corn, housemade coleslaw and Five Brothers Bergy Bits cheese curds. I kicked off the challenge by jumping right out of my comfort zone and into foods that I do not eat. It is no secret that I am married to bacon but I tend to not eat any other pork. I’ve also only recently added beans and corn to my diet once I discovered I love to chili. I wasn’t brave enough to incorporate the slaw though. This was a great poutine but was lacking fries in my opinion. I felt like I was left eating pork and beans. (Goes well with a few pints of Black Horse). 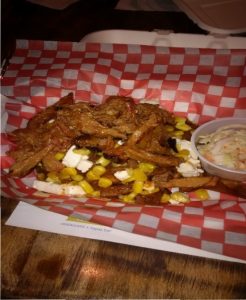 2. Klondike Jake’s: The next day we headed to Klondike Jake’s. I like this restaurant because I don’t visit there much but I always enjoy the food. This was a must visit on my list because their offering was the “Buffalo Chicken Poutine” which basically was created for me. Jake decided to double down ongoing local because they used Ziggy Peelgood’s fries as well as the Five Brothers Bergy Bits curds and combined them with crispy chicken tossed in their house-made buttery buffalo sauce, green onions and a drizzling of peppercorn ranch. This was like a dream come true for me. I regret not going back and having another one of these poutines. It was so good. (I’d say this went well with some pints of Coors Light but I only bought it because they were on special and frankly this poutine would go great with anything). 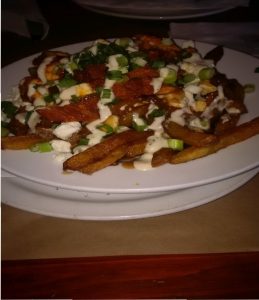 3. Magnum & Steins: I took the weekend off from poutine but got back into the challenge three days later. I was excited to try the “Fish & Chips Poutine” after having tried fish for basically the first time only a couple of weeks prior. The Poutine Challenge Facebook page said that this recipe included Salt & vinegar crusted cod, house made dressing, gravy, tartar sauce, and Five Brothers Bergy Bits. In reality, the fish was battered in Hawkins Cheesies. I was a little disappointed I’d be missing out on the salt and vinegar but this batter was amazing. This poutine was amazing. My roommate/bestie called this a perfect meeting between Newfoundland and Quebec. I really wanted to take my parents to try this one despite their under-enthusiasm for poutine. (I figure I’m adopted). 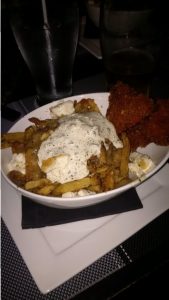 4. Seto Kitchen & Bar: I found myself at Seto late on a Saturday night. One really cool thing about this challenge was that I found myself at several restaurants that I would not have necessarily tried or even heard about. Seto is a very cool spot with the perfect music for the type of vibe they are trying to create (despite what the drunkenly gross touchy-feely couple seated next to us might have thought). Their submission to the 2016 Poutine Challenge was the “Hasselback Poutine” which is a triple cooked hasselback style potato covered in roasted duck gravy, Five Brothers Bergy Bits and their homemade “SETO” ketchup. I’ll say that this was maybe the most creative take on the poutine and I did really like the ketchup but something was missing. Eating a potato is not as fun as fries. 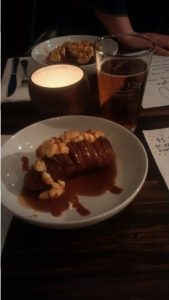 5. Merlo’s Inferno: I’d only been to Merlo’s Inferno once before and wasn’t overly impressed but when I saw that their offering was a “Bacon Burger Poutine” which consisted of Five Brothers “Bergy Bits” curds, ground beef, bacon, a hamburger bun topped off with a fried pickle and an onion ring and beef gravy. I wasn’t too thrilled with the idea of a hamburger bun (don’t we have enough carbs in the poutine as it is?) or the deep fried pickle and onion ring, but as I said earlier I’m married to bacon. We arrived at Merlo’s Inferno just after 7 PM on a Thursday evening. It took over ten minutes for us to get seated and after an hour we finally received our food. Once the poutines arrived we made a startling discovery: there was no bacon on the “Bacon Burger Poutine”. We complained and was brought bacon in a plastic container and we assembled our own. The restaurant was busy and the kitchen was swamped. Apparently, they had also not been making many of these poutines and got the recipe wrong. Needless to say, I was disappointed. Bacon has never let me down so badly. 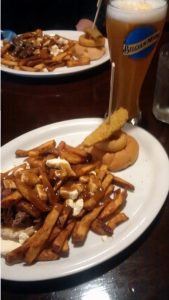 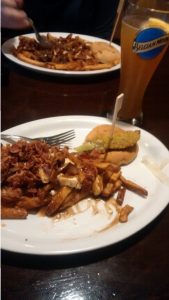 6. Granite: I finished the Poutine Challenge with a trip to Granite; another restaurant I may not have visited if it weren’t for the challenge and one that I definitely want to visit again. One thing though, the music they played does not match the décor and feel of the restaurant. I felt like there was a disconnect there. Granite’s submission for the challenge was the “Dirty South” poutine which consisted of Southern fried Bergy Bits curds, beer-soaked chorizo, cornbread dressing, red-eye gravy and a sunny side egg. This was definitely a very bold and original recipe and one I was excited about. I’m a fan of spice and have never tried chorizo before but I was all in for anything soaked in beer, cornbread and an egg. Unfortunately for us, the chef was not in on this Thursday evening and the poutine was made way too salty. I’m not a huge fan of salt but I can eat it… this was almost unbearable which was really bad because this poutine could have been the winner for me. It was made better with vinegar but the salt was too overpowering. Thanks to the server we got some free beer though as an apology! 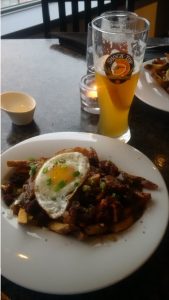 So six out of eighteen poutines is not a bad attempt I don’t think. In my previous article, Adam said they had no intentions of extending the challenge through June but I do feel that eighteen participants are kind of a lot. Another thing I discovered was that the price of the poutines varied from restaurant to restaurant. This is fine especially given some of the ingredients but most of the restaurants did not have their prices listed so it was a surprise when you got your bill. (This was particularly disappointing when Granite’s cost 17 dollars and was offered to us for free but we chose a beer instead).

So who won?  Even though I forgot to vote I am very pleased with the winner. Klondike Jake’swas announced the winner on Canada Day and I feel like this is a bit of a surprise. Don’t get me wrong, the poutine was amazing and I would have voted for it if I hadn’t had the “Fish & Chips Poutine” at Magnum & Steins. “Buffalo Chicken” would be a natural choice for me given my food interests but Magnum & Steins offered an interesting recipe. It didn’t veer too far away from the traditional poutine and it was also very traditionally Newfoundland. Plus, it had to be impressive for me to vote against Buffalo anything!

We are still waiting for Five Brothers Artisan Cheese to announce how many poutines were sold during the month but what a month it was! I really broadened my horizons when it comes to trying new foods and restaurants. I hope that Klondike Jake’s keeps their poutine on the menu because I definitely want seconds. 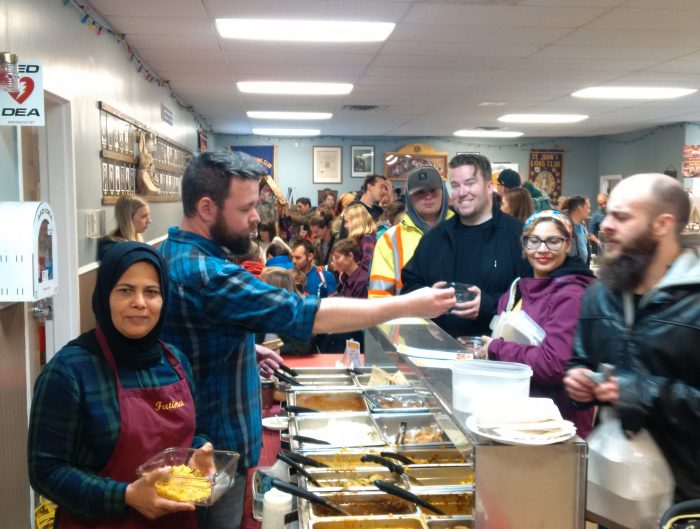 […] was the first place I visited when I decided to participate in the 2016 poutine challenge and it was quite tasty. I also enjoyed this restaurant’s offering in the 2017 Burger Battle, but […] 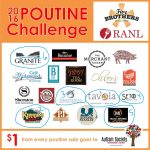