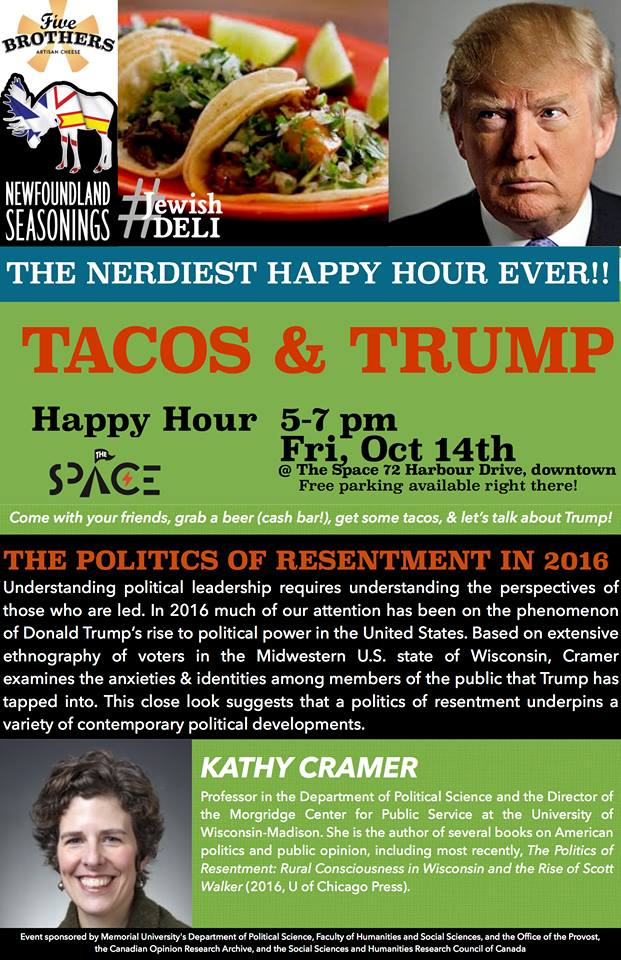 “My culture is a very dominant culture, and it’s imposing and it’s causing problems. If you don’t do something about it, you’re going to have taco trucks on every corner,” warned Marco Gutierrez, the founder of the group Latinos for Trump during an interview on CNBC in early September. Now if that is a ploy to get people to vote Trump and I was an American I’d definitely be saying “I’m with her.” (Also because Trump is just a mess).

If you follow my articles and I’m sure you do, you remember that I wrote fondly about Cinco de Mayo and expressed my love for tacos.
There were dozens of other people who would agree this past Friday as they gathered for what the organizers called “the nerdiest happy hour ever” at The Space on Harbour Drive for Tacos & Trump Happy Hour. This event was organized by Dr. Amanda Bittner and the Political Science department of Memorial University combined tacos provided by the Jewish Deli using Five Brothers Artisan Cheese and Newfoundland Seasonings with a lecture from Kathy Cramer, Professor in the Department of Political Science and the Director of the Morgridge Center for Public Service at the University of Wisconsin-Madison. The discussion focused on “The Politics of Resentment in 2016,” and looked at the reasons for Donald Trump’s rise to political power.

As I mentioned earlier, the event was held at The Space on Harbour Drive and was scheduled from 5-7 PM. I got there about a half hour late but I didn’t think I’d miss much as I assumed that the first bit of time would be spent getting tacos and beers but I gravely underestimated the eagerness of the PoliSci community as Professor Cramer’s talk was nearly over. (I’m not sure what I was thinking when the event organizers themselves dubbed it as “the nerdiest happy hour ever” so it makes sense that they would want to start right away). I did get to hear some of what she said and was there for the question and answer session.

The lecture focused on rural resentment toward cities and its implications for today’s political landscape. In my opinion, the main question on people’s mind these days is not really “How can a man like Donald Trump be running for President?” but “How can a man like Donald Trump run for President AND have supporters?” Professor Cramer painted a picture of rural Wisconsin and she talked about seeing how poverty really exists in rural areas. The recession hit this area very hard and people are looking for signs of improvement and are not finding it. She said that services like Obamacare are not really working for these people so it might make sense that they don’t want to vote for “more of the same” and Hillary Clinton. They have a sense of nostalgia and long for the “good old days” when there was a stronger middle class and people weren’t struggling to make ends meet so in this sense Trump’s “Make America great again” rhetoric really resonates.

I spoke with Dr. Amanda Bittner about the event and asked how it all came about and she said it all stemmed from the comments that Marco Gutierrez had made; the same quote I started this article with. When asked about her thoughts on the event Dr. Bittner said that it was “awesome.” “Great turnout, and lots of great audience questions. Kathy Cramer is so smart and her research is so interesting, I think it was amazing.”

Naturally many audience questions and discussion stemmed from the tape of Trump having a lewd conversation about women back in 2005. One person asked if the video would have changed the opinions of those same rural Wisconsinites she interviewed, Professor Cramer said that it should have but noted that from a Political Science perspective, people have already made up their minds and nothing at this point is going to change it. (She noted however that it wasn’t a coincidence that the first viable female candidate running for President of the United States is a very misogynistic man which could start a whole other discussion about gender dynamics which in fact was had the very next day in a similar forum but with a different menu.)
There was also a discussion about personality which Dr. Bittner has recently written about. Professor Cramer believes that personality in this election is very important. Trump is combative and anti-establishment which plays well with folks who believe that the institutions in place today are not working for them. They want someone who says that they can take charge and change things quickly. Dr. Bittner agrees to note that a large part of Trump’s campaign hasn’t really been about policy but more about preying on the emotions of voters. (You can read more about Dr. Bittner’s thoughts on personality here.)

As the discussion began to clue up and the tacos were all but gone, one audience member asked Professor Cramer who she thinks will win the election. She responded that she believes Clinton will win based on polls. Professor Cramer also questioned polls themselves and wonders if people are being honest when they are taking part. She believes the election will be close but hopes that it won’t be. Dr. Bittner agrees with Professor Cramer about the outcome of the election but says she is worried about the future of politics and not just in America. “Trump is unleashing a world where it’s “ok” to say really offensive racist and misogynistic things and still be a serious contender for office.” This is an important concern because as many have noted, Trump’s supporters are not just going to go away once this is all said and done.

There is no doubt that the weeks leading up to the election on November 8 will be exciting and even at times head-scratching. At this point I’m not sure anyone can guess what new allegations from the past may come up or where the discussion may take us in the coming weeks but one thing is for sure; if Trump loses and Hillary wins thereby allowing the “dominant” Mexican culture to flourish and the number of taco trucks to multiply as Mr. Gutierrez warns, then I for one hope that they get so overpopulated that they have no choice but to drive said taco trucks to Canada, specifically St. John’s; and I don’t think I’m alone. 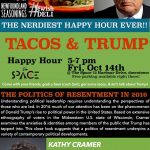