“She came up to me afterwards and said ‘let’s be friends, you seem fun.’ We became pretty fast friends. She is a beam of light- her personality is so infectious because she is genuinely good,” recalls Snow of their initial introduction. “ Later, I noticed on her instagram she had a call for models and I thought me and my partner might want to do it for a laugh and I thought it would be fun. I later mentioned I always wanted to try body painting, and in my mind I pictured painting one person. She thought it would be fun to do a group project.” 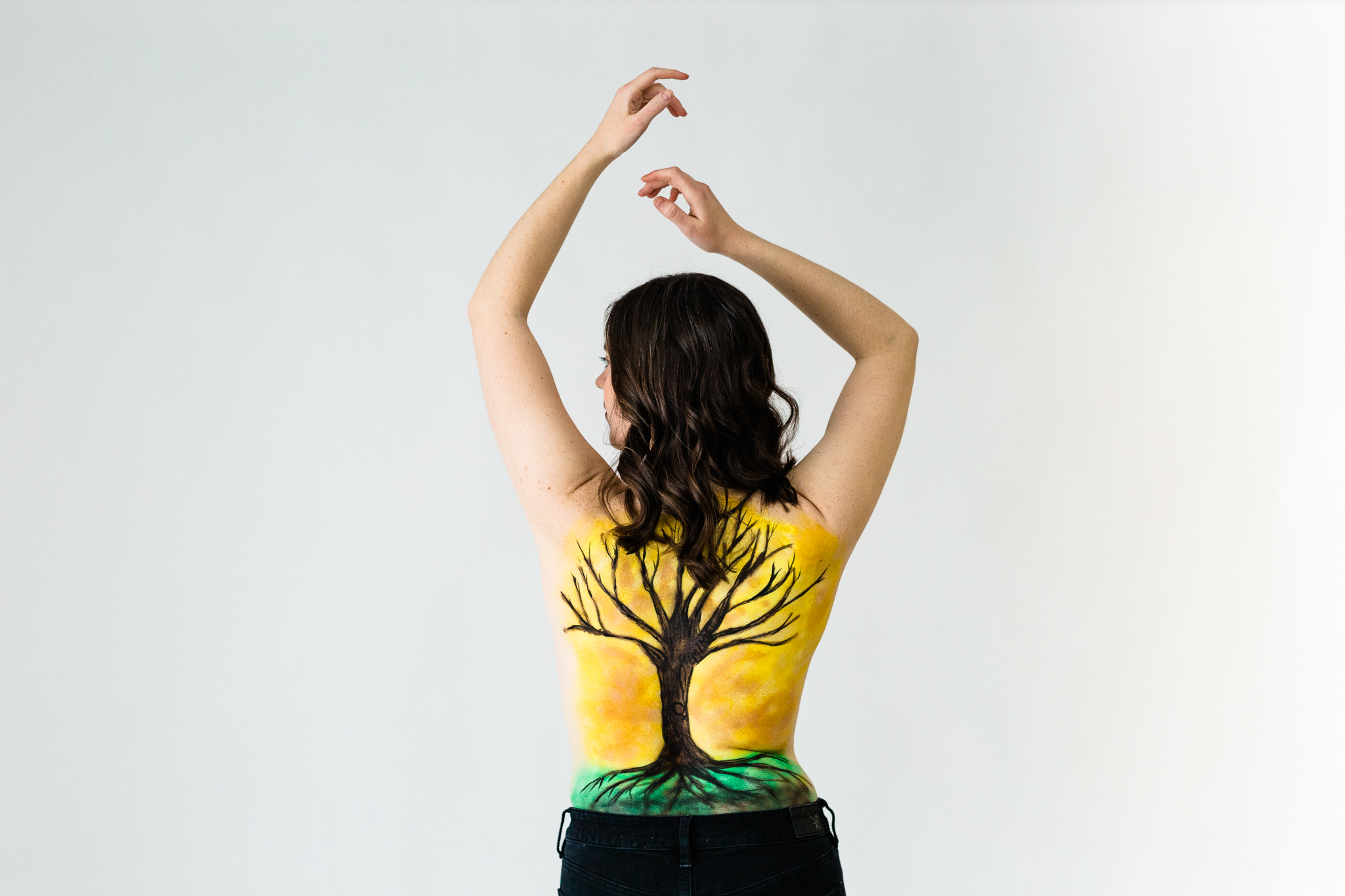 From there grew an inspiring and meaningful event. The friends put out a call for models and asked them for a headshot and a statement on their feminist belief, asking them why they became feminist, what they believed in or what event brought their feminism to life.

Five models were chosen based on their statements and became part of a International Women’s Day presentation titled Sharing Stories: Feminisms Re/Presented.

“I translated their feminism belief statement into a visual art piece that I painted on their backs and Maddie took their photos. We had this idea and then only had about ten days to turn it around. I intended to practice and I did a little bit but it worked out really well, for what it was I think it was beautiful and it’s something I would like to continue,’ said the artist of body painting. 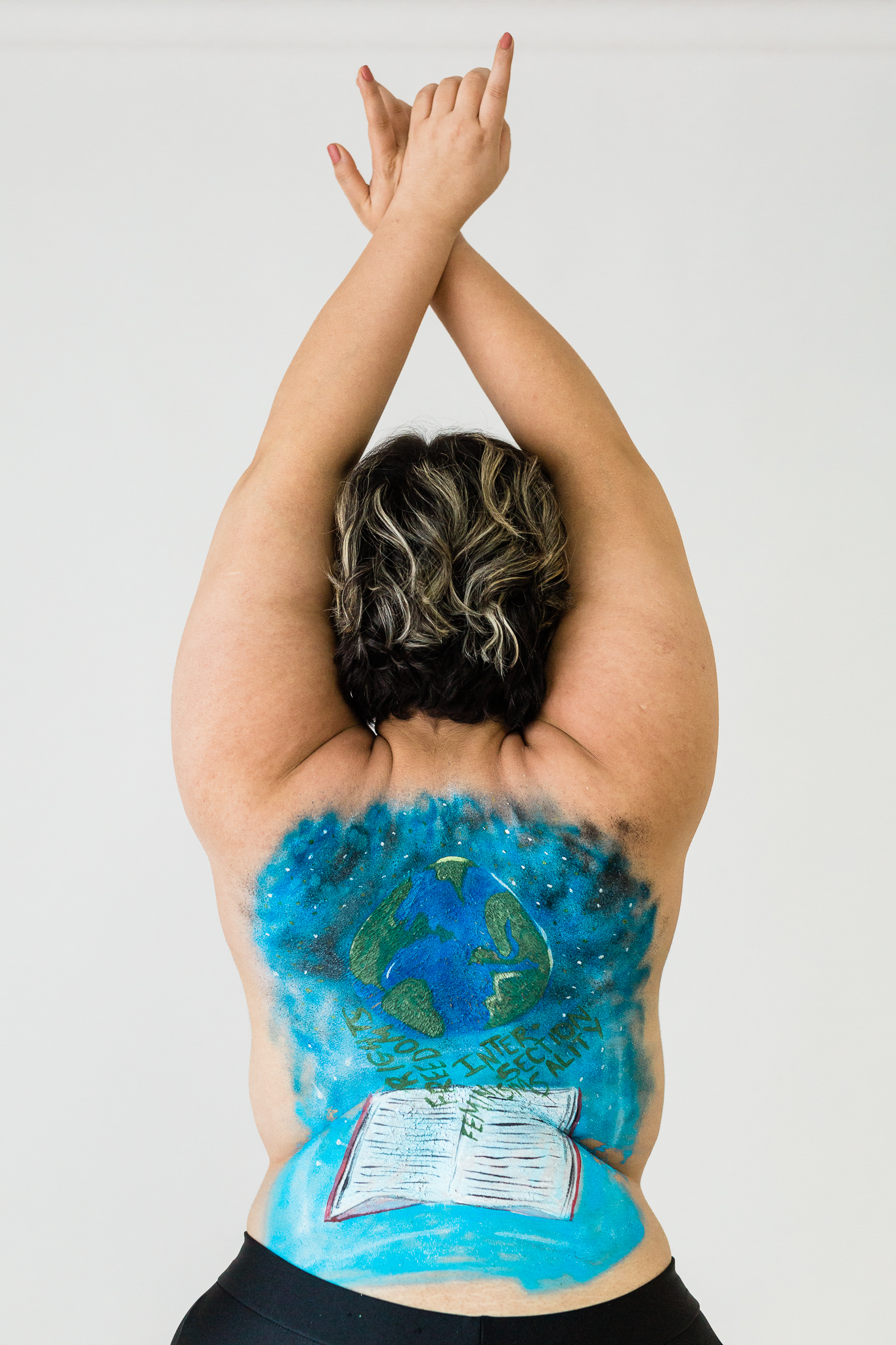 Everyone met at Shyama Studios with Snow and Mills- each model was painted and photographed, and received make up from Nadia Ali Makeup Artistry.

“Everybody just felt so beautiful and they all told her (Nadia) how good they felt. I watched her make people feel amazing all day long. She is so talented and made everyone look beautiful,” said Snow.

Sharing Stories: Feminism Re/Presented was not only a celebration of IWD, but a showcase of different definitions of feminism as stated by the five models: Deanna, Julia, Bahaar, Deirdre and Amnesty. 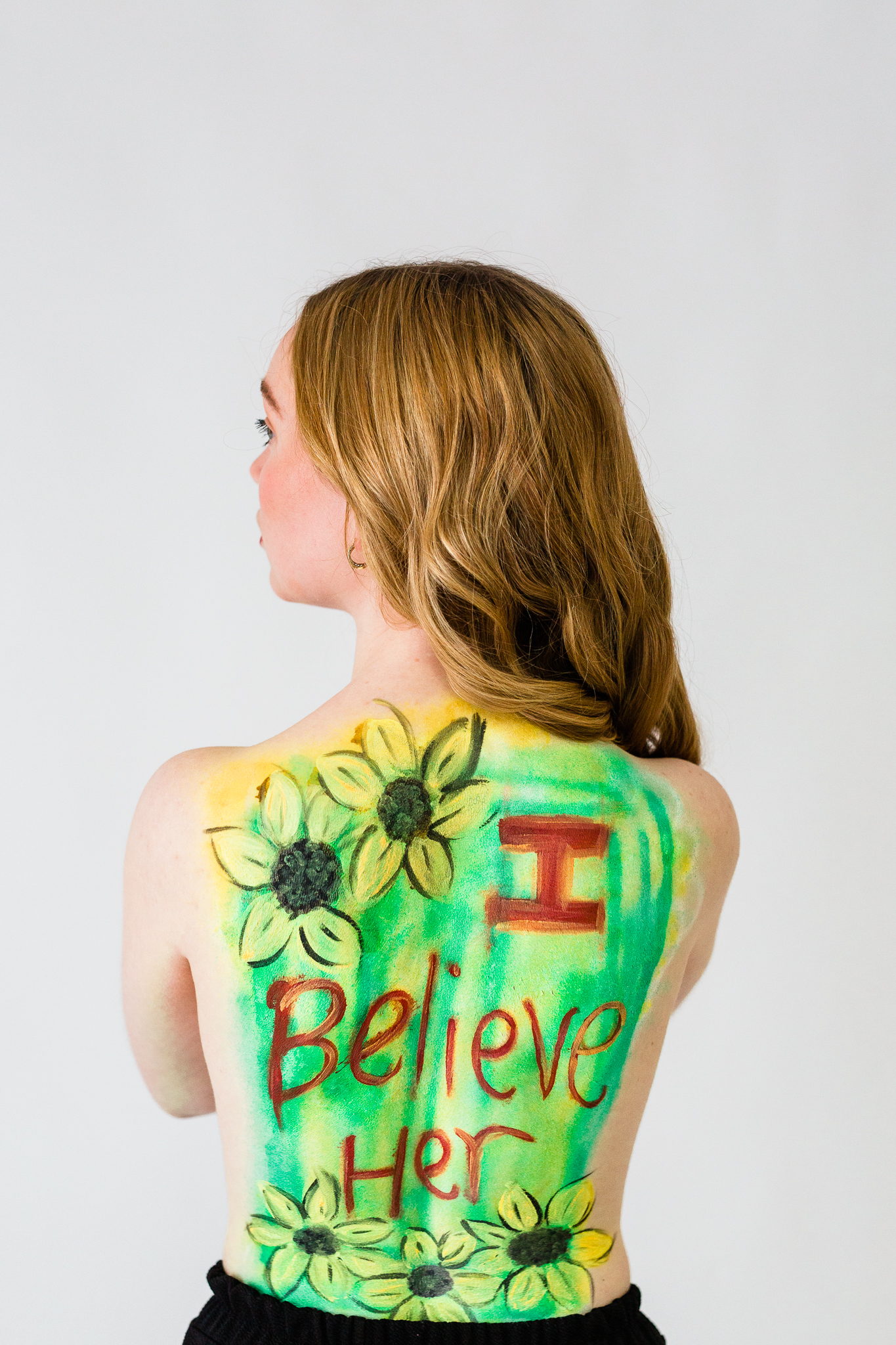 “We wanted to showcase some feminist women in the community who are doing cool things. I could have designed paintings for people and put it on their bodies and that would have been fine, but for me I really wanted an event where everyone felt like their own brand of feminism was represented,” explained Snow. “I really wanted each model to feel like this is powerful because this is about me. Painting on somebody’s body is really intimate and I didn’t want to put something on their body that doesn’t necessarily represent them or they didn’t feel a connection with. It was important that everyone felt like they were positively and accurately represented.”

Taking someone else’s statement and interpreting it into art was something that Snow says took a lot of work, but as a student studying Gender Studies at Memorial University, she has become accustomed to visualizing social theory into an art piece because it’s something that is important to her. 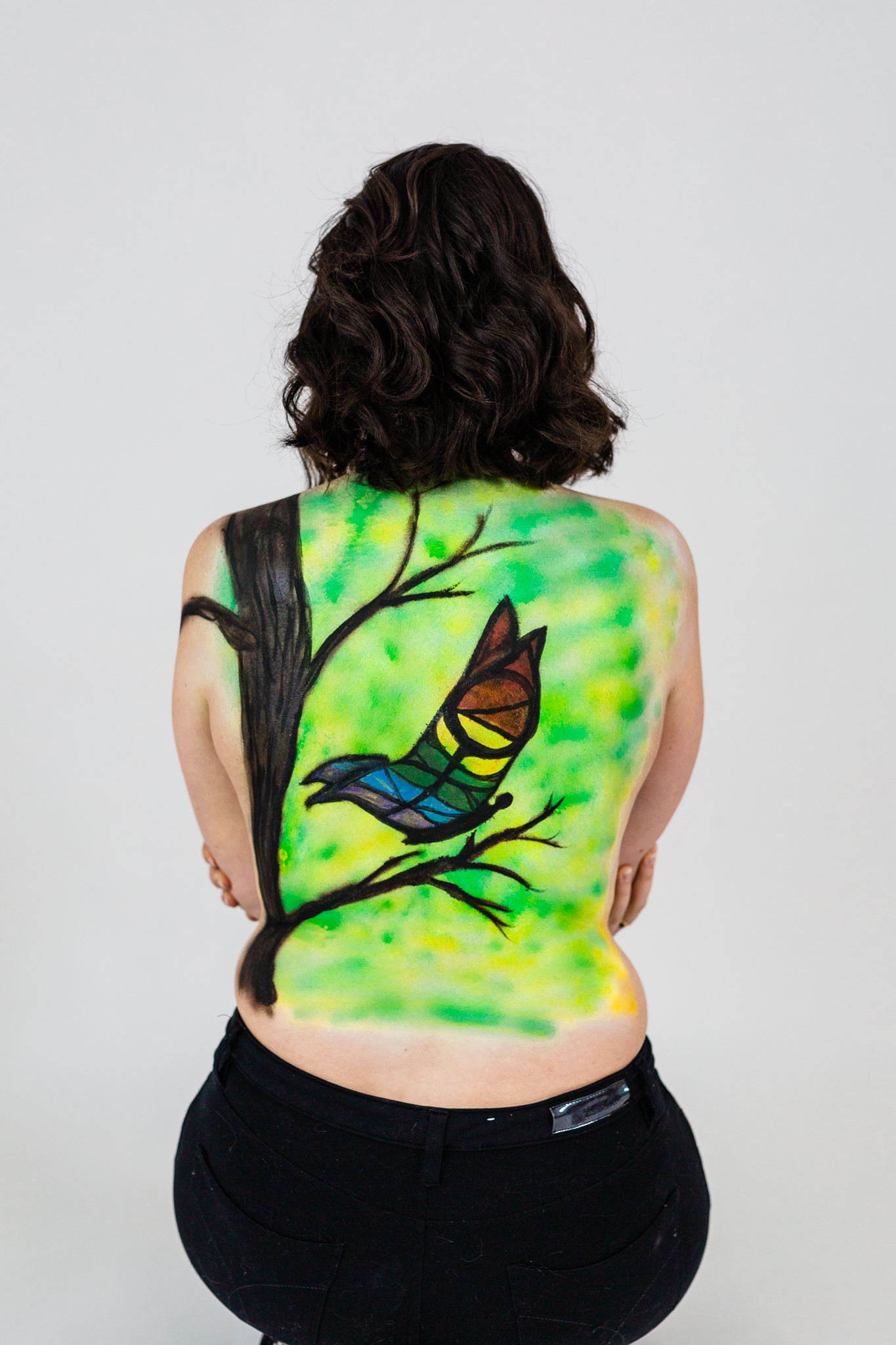 Snow and Mills are featured speakers at Millstreet Brewery Event for IWD today, March 8, from 2-5. Participants will be taught how to brew with two women brewers, Jacoba Mol and Alexis Wagner and enjoy a networking event, while hearing presentations from community leaders.

Snow has been painting her whole life, but a few years ago she found herself using it as an outlet to heal and rediscover.

“I had exited an abusive relationship and I created more art to work through finding myself again. Since then, I started taking on concepts and things that scared me, or things I wanted to explore or learn about myself. I started taking on very feminist inspired pieces,” said the painter. “A lot of them strengthened my beliefs in a big way. I like to try anything and everything, which is how I tried body art.

Snow is also photographed in the project, with the words ‘Breaking Free” painted across her chest – which Mills actually painted for her. 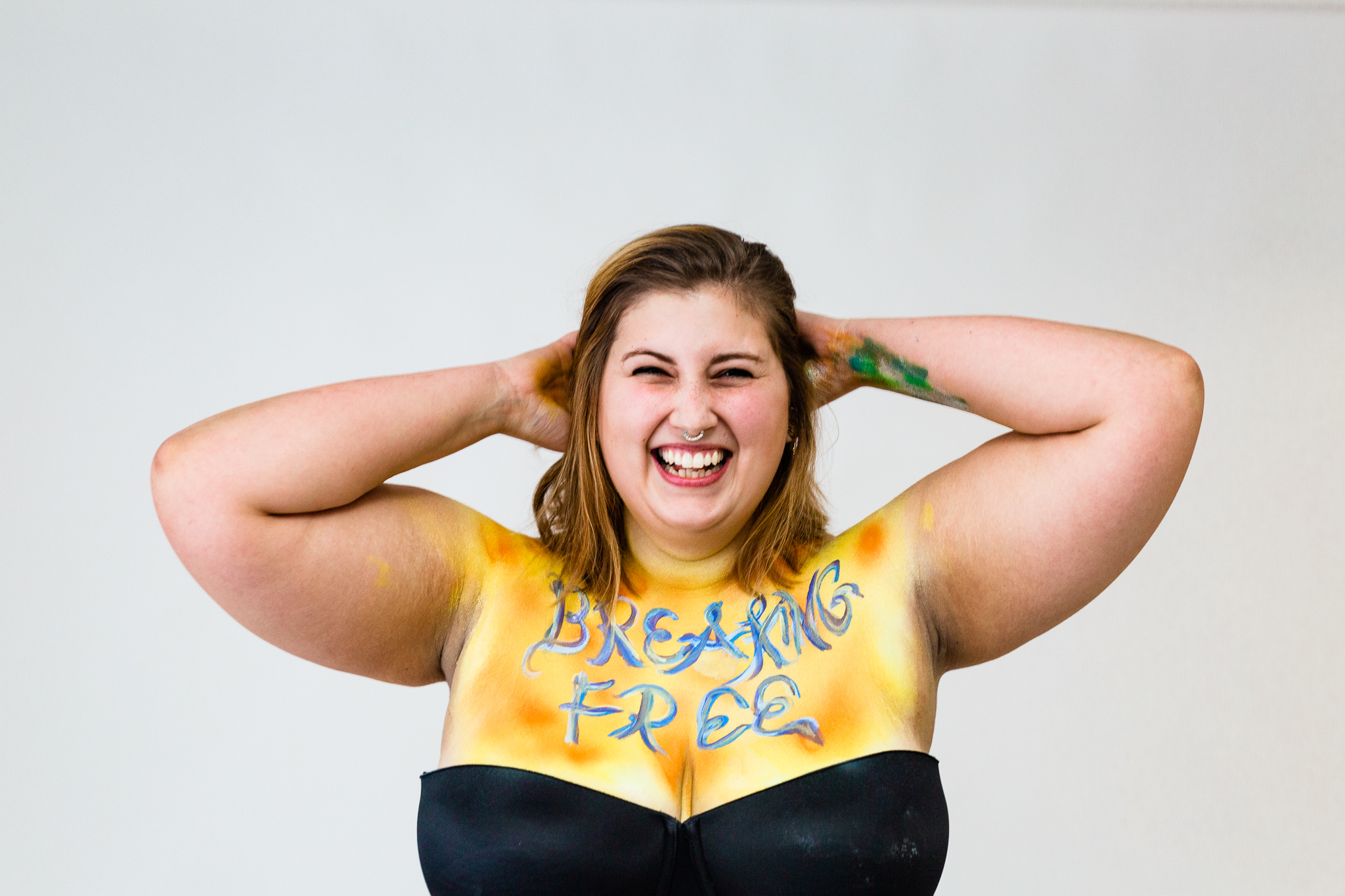 “I felt like I was hiding under a rock for along time or I was afraid to do anything or put myself out there or meet people because I was afraid. So my piece said ‘Breaking Free’ and Maddie painted it for me, which is kind of full circle. That was for me, breaking free of anything that was holding me back,”  said Snow.

Though she hadn’t published a statement regarding her personal feminism, Snow’s definition which can be depicted directly through Sharing Stories.

“My feminist beliefs are rooted in equality – although I truly believe that equality looks different for everyone. As feminists, we all have different passions and projects that are important to us, but I feel that some feminisms are misrepresented, or underrepresented. Whether that’s in art, politics, policy, media, education, or elsewhere. My inspiration for this project stems from equal representation, for all personal brands of feminism,” she said. “Sharing Stories: Feminisms Re/Presented attempts to engage with equal representation, because the personal is political. Each model had different driving forces for their feminisms, and it was my intention to visually represent each person’s narratives in a way that was meaningful for them. I am truly honoured to have been trusted with that role, and I am grateful to those women for sharing their stories with us.”

Photos were taken at Shayama Studios 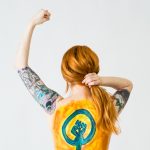