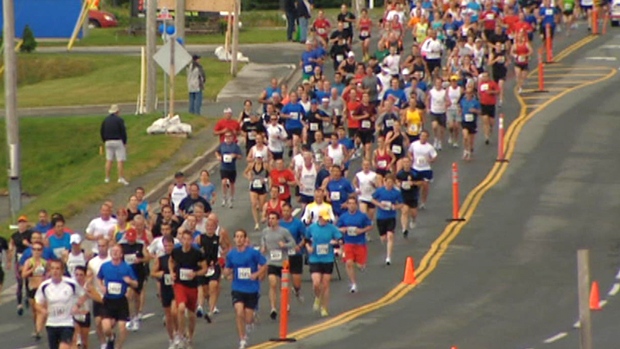 Three years ago, with my cousin whom I look at as a little sister, I ran the Tely 10. She got it in her head that it was something we should do. I hadn’t given it much thought despite being fairly physically fit for most of my university career but she was adamant that it was something we could do. Truth be told, I had no desire to put the effort into training. Even more full disclosure: I didn’t want to try and do embarrassingly bad. I actually think back to three years ago as one of the last times I can truly say I was somewhat close to happy (or whatever it is we think is “happy”).

At the time, I was working full time, the weather was nice for late April/early May and I had something to do after work; run. During my training, the best run I had was about ten kilometers in a little over an hour. By my logic, I should have been able to run ten miles in about two hours so that became my goal. My cousin and I completed the race in about an hour and fifty minutes; ten minutes better than my intended goal. 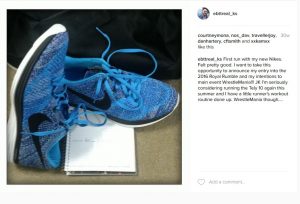 I was fairly impressed with myself and wasn’t injured or really hurting at all after. My cousin would go on to run the race the following year but I just was not feeling it. I wasn’t exercising as much as I normally do and I had this huge fear that I might run the race and do worse than my previous time which would be completely unacceptable to me so as I learned from Homer Simpson many years ago that you should “never try”. I tried and did OK so trying again must result in a failure.

I continued to have no desire to try again at the Tely 10 until the end of 2015. I had started running a bit more and began to realize that it made me feel good. I started integrating an hour-long walk/run/jog into my weekly gym routine at around November and was getting more and more impressed and competitive with myself as my distances improved. I got a new pair of Nike Flyknit Lunars for Christmas and decided that come January I would legitimately give this a shot. I made some jokey Instagram post about announcing my intention to run in this year’s Tely 10.
Slowly but surely, my time and distance got better and better. When it came time to register for the race I still held off though. I don’t like committing to things so I didn’t want to make this official. I really wanted to beat my previous time and I was scared that I would fail. Logically I knew I had to do better than the last time; I was running a lot more and had been for a lot longer. I could fit in a couple of hour-long ten kilometre runs at least a couple of times a week. I could not lose.

But then there were the barriers. I had a few big disappointments in the last little while and I sort of lost focus on my training. Let’s not forget that I spent the entire month of June eating poutine and drinking beer with it. I was not feeling very confident in myself and kept avoiding the registration until just a few days before the deadline. I needed to prove this to myself that I was capable of being successful at something I wanted. Again, logically I had to do better than before the amount of effort I was putting into this greatly exceeded the first time around. There were a few things I had failed to consider though such as weather, temperature, and wind speed; things that could affect my time.

So the big day came. I was one of nearly 5000 participants ready to embark on this ten-mile odyssey. OK, maybe “Odyssey” is a bit of a stretch. The morning started out ok; I hadn’t slept the night before because it was so humid in my apartment (and because I was kind of super nervous). The air felt relatively cool, or cooler than it had been, the sun wasn’t out yet and the forecasted rain was nowhere in sight. I sat on the shuttle bus on the way to the start line listening to the playlist I had made to pump me up. Honestly, I was feeling very emotional; I had put a lot of importance on this race and I was very nervous about how I might feel should it not go the way I wanted. Not long after the race started at 8 am the rain came. It was fairly heavy for a few minutes and quite a bit of water built up on the road. Surprisingly this was not affecting my run and I seemed to be making a good pace. The temperature began to rise though and the sun came out. I kept telling myself to slow down a little in order to keep a good pace throughout. My brother’s message to stay hydrated kept buzzing in my head and I made sure to stop at all the water and Gatorade stations.

It’s kind of funny because there were times that my mind was racing as I ran and times where my only thought was to just keep running. I had my Nike Running app on and the voiceover lady was telling me how I was doing. (Clearly, I need to recalibrate or something because when all was said and done it said I had completed 18.5k which is more than 10 miles…) Despite not really focusing on what was going on around me I was impressed by the number of people who came out to watch the race and cheer the competitors on. Props to anyone who had a clever sign (especially to whoever had the one that said “Now isn’t the time for Walken and had a picture of Christopher Walken next to it). I have to say I was feeling pretty good throughout. I had to stop and walk a few times but I didn’t feel like I couldn’t do this. My goal was to beat myself from three years ago. Ideally, I wanted to complete the race in 90 minutes but I ended up seven minutes shy. My official time ended up being 1:37:25 which is thirteen minutes better than my time from three years ago. Needless to say, I was pretty happy with myself. I had set out to do something and I did not fail. I really needed this pick me up.

Someone had asked me why I decided to register for the race when I feared failure so much and I honestly could not answer. It would have been easier to not register and not try because there was no chance of failure then. My answer to them was “Why does anyone register really?” I knew I was not going to win the race. There was no chance of that. So why do we sign up, and pay money ($80 when you wait until the last minute to register) to get up at an ungodly hour and run for 10 miles? I honestly don’t know why anyone would do it; I don’t really know why I did it, to be honest, other than I had to prove something to myself. I’m sure you could ask any of the nearly 5,000 participants why they ran the race and you very well might get 5,000 different responses. While writing this article I did a quick Google search of the Tely 10 and found a couple of uplifting articles from The Telegram and CBC one about what the writer saw as he ran the race and another about an eighty-year-old woman who beat a record for her age. I beat both of these people’s times but I don’t think they care about that and honestly neither do I. I beat me. And that was what I set out to do.

In the days and even moments leading up to the start of the race a lyric from JAY-Z’s song “U Don’t Know” kept playing in my head “I, will, not, lose”; and I didn’t. 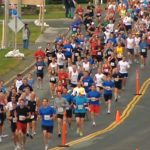