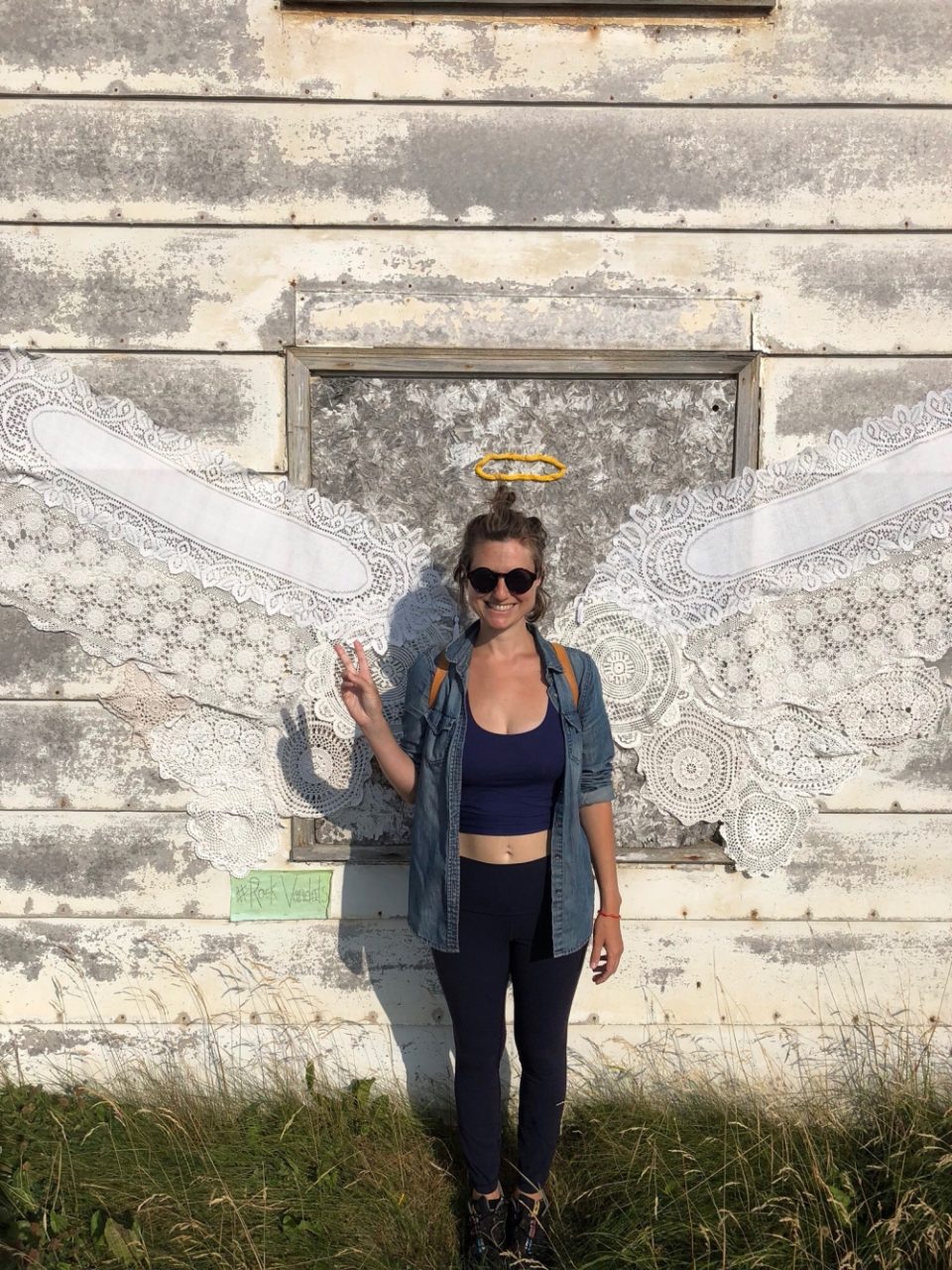 If you happen to be walking down the streets and come across an unexpected piece of knitted art work- it’s likely you’ve been yarn bombed.

“Yarnbombing is where you make street art from yarn. It’s totally temporary, and since most of us associate knitting and crochet with someone dear, it has a tendency to make us feel warm and fuzzy,” explain Nina Elliott of Twillingate.

Elliott, also known as Rock Vandal, started experimenting with yarn bombing as a new way to be creative and have fun.

Rock Vandal is originally from Hamilton, Ontario and she moved to Twllingate from England in 2012. Referring to herself as “a Newfoundlander by choice,” Elliott gets her inspiration from all around her.

“Everywhere and anywhere! Mostly I just try to be open to inspiration, wherever it comes from. For example- I made the doiley angel wings to partake in the global phenomenon of angel-wing-street art,” said the artist of her pieces. “Old Manolis and the Sea was in response to a local environmental issue, and Chillingate was the result of the prime view of the Twill- water tower from my dining room. Lately, I’ve been trying to not make too much of a fuss and just do it.” 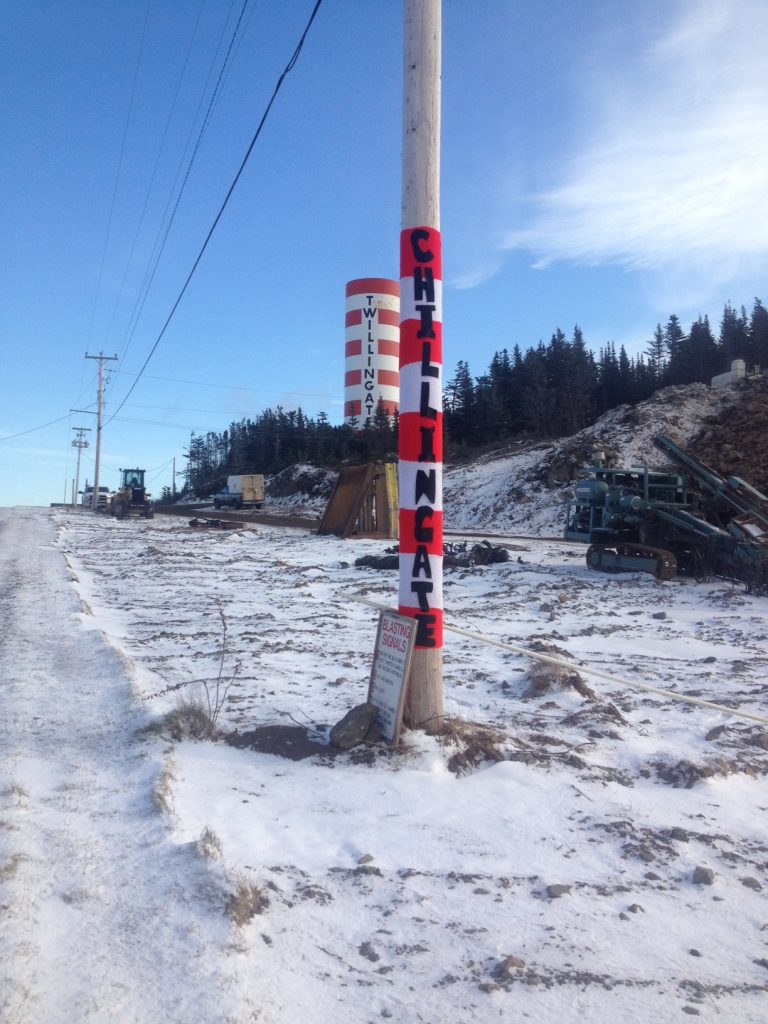 Chilingate: A yarnbomb made with community donations 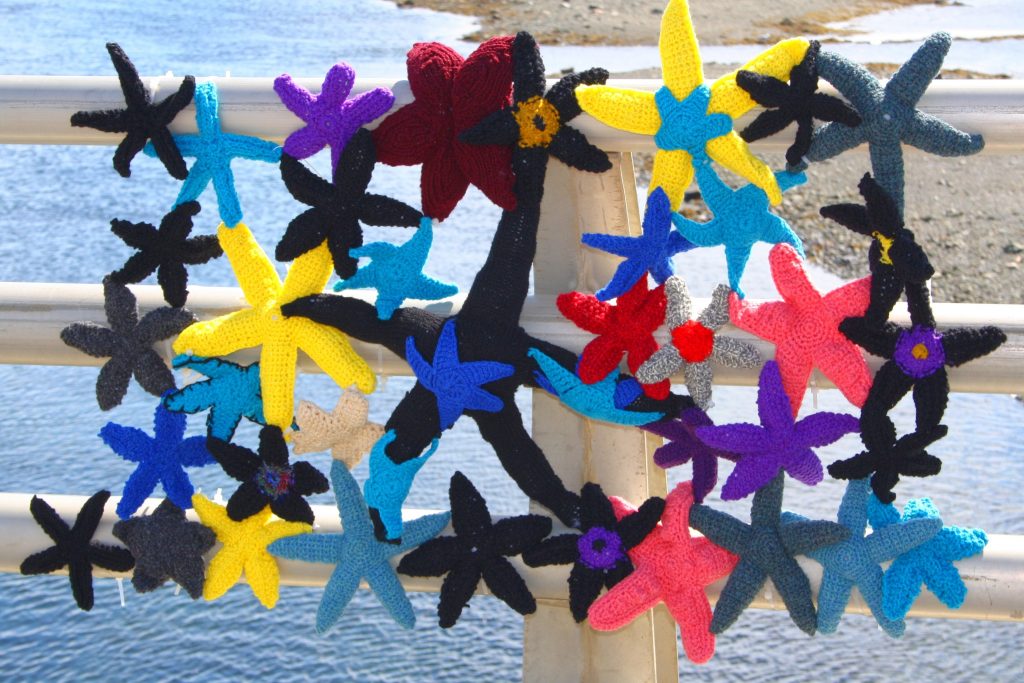 Old Manolis and the Sea in Twillingate: Starfish knit by community members

Yarn bombing differs from other artwork because it eventually is removed or deteriorates. It’s temporarily a part of the environment and eventually fades away.

“Some things I’m able to wash and re-jig into new projects, that’s the best. Other pieces need to be thrown away- anything that’s spent a long time in the sun gets really bleached,” explained Rock Vandal. “The sun vs the rest of Newfoundland’s extreme weather is the hardest on the art. I just got a shed so I’m hopeful I’ll be able to store and recycle more projects now.” 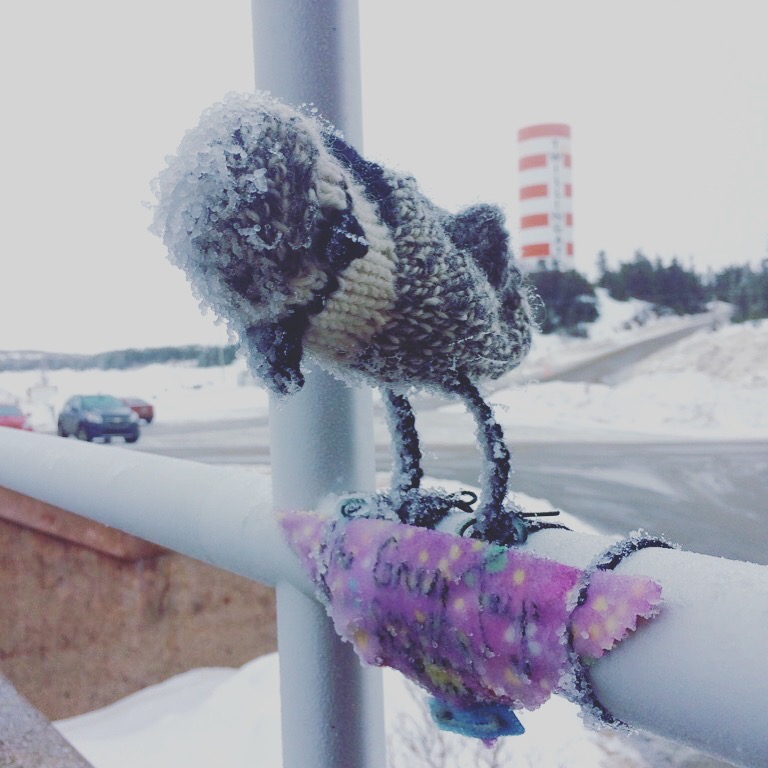 Such a particular type of craft allows Elliott to leave a piece of herself wherever she goes, while also adding some colour to an unnoticed structure. While you can find her projects in portions of Newfoundland, she has laid her work all over the globe.

“2016 was one of the best years of my life yet. My husband and I travelled through South East Asia for thirteen months. We visited Thailand, Vietnam, Laos, Malaysia and Cambodia, spending most of our time in Thailand,” said the knitter. “I set the goal of knitting for each country before we left Canada. Each knitting project is somehow reflective of our experiences during that time and I gifted most of it after photographing it. It was a special challenge to make my crafting-kit fit in my backpack.” 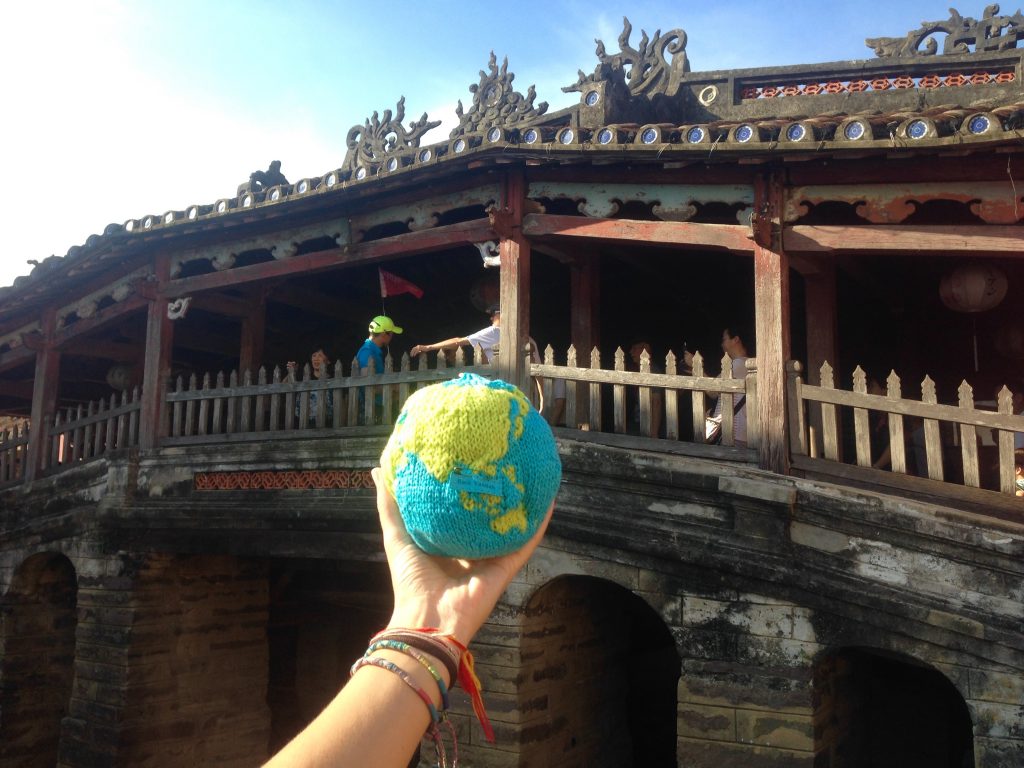 Elliott’s street art is now a part of the Twillingate community and she is appreciative to see her work being accepted within the town because she believes art bring positivity to everyone.

“I think that our communities affect our health, and that art has the ability to shift our thoughts and moods positivity. So I hope that by bringing a few extra smiles in Twillingate, everyone will be happier and maybe even healthier,” she explained. “It’s fun! I like it yarn bombing) because it challenges me, opens my eyes to my surroundings and it’s a fun way to engage with the entire community. I consider it a real privilege that Twillingate supports my art and in turn I try to be positive and respectful with it.” 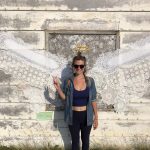