Discovery Channel’s Last Stop Garage truly does live up to its own name, though some fans are a bit curious about the realities of the location and business.

“We started having random people showing up to the garage wanting to see what we were doing, are we a real garage, do we actually exist, is it at the end of the road,” said Corey Webber, the show’s head mechanic. “There were a couple of people from the States, they wanted to see the end of the road and I took them and said ‘this is it – if you go any further you’ll need a four wheeler. We certainly have a lot more people showing up at the garage and showing their support for the tv show, as well as the rest of the community.”

Last Stop Garage is a reality show currently in its second season. The show is set in North West River, Labrador at the CRB Rebuild and Recreation shop, also known as Get ‘Er Done Garage, because it’s where they get er done, no matter what.

While the shop is most definitely the last stop, Collin Baikie, owner of CRB, wants everyone to know the entire show is an accurate representation.

“We aren’t fake or nothing, this is reality for us. It’s the greatest thing to have a chance to be on tv. We are having fun being ourselves. When we are on tv, this is us,” said the owner. “This is as real as it gets for us, we wanted to make sure of that. We are who we are on tv and we thank all the viewers for watching, we are excited to do more things.”

“I loves it all, I live everyday as an adventure. Honest to God, I got a lot of good memories. Moving here was a good memory and growing up here was wonderful. Honestly a chance to be on tv that was quite the accomplishment. With all the billions of people in the world you have two guys as the main focus on tv show which is pretty epic,” reiterated the mechanic.

We aren’t fake or nothing, this is reality for us. It’s the greatest thing to have a chance to be on tv. We are having fun being ourselves. When we are on tv, this is us

Season two has been slightly different than the first time around, and both Baikie and Webber have recognized the difference for themselves and the community.

“For me, it took me awhile to get used to the tv. Corey is pretty good with the tv right away, he just says it like it is, no holds back so it was easy for him,” recalls Baikie. “The first season was we had to feel out what it was all about and now that we know, it made it more fun to do. We have more say in the process now. We are only warming up and loosening up. We just want to give the viewers what they want to see and that is awesome projects, people and fun.”

“It seems easier, first season was hell.  How do you justify three cameras running around chasing you when you have certain clients coming trying to get the job done?” wondered Webber.  “It was difficult because no one expects to be on tv and no one expects to have twelve people from Toronto show up, trying to get a tv show. Every now and then you have a director trying to help you to help the viewer because you aren’t really sure how to be on tv. Most people from a small community know the French dictionary very well, and by that I mean curse words – you are not really allowed cursing on tv.”

Webber moved to North West River when he was only 13 years old, from there he eventually quit school and started fixing things, which inevitably became his true calling.

“I can’t say I taught myself.  Along the way, I started off at a young age, growing up, working on stuff, fixing stuff. I learned what I could from the people that I knew. I  picked up a couple of tricks along the way and honestly, I’m not saying this, cause a lot of people don’t like saying it but google helped me out the majority of the friggin way,” he said. “When you get confused about something you can google it and there is probably three million people who already did it.”

Baikie is quick to jump in and remind Webber of his exceptional talent.

“Corey likes to downplay it a little bit. He definitely knows how to fix stuff. We started at such a young age working out of a shed and building our own stuff. It’s really trial and error and that’s how we grew up, fixing stuff and tackling it. Learning from our mistakes and moving forward. Corey is mechanically inclined, he can fix anything. He’s a hard worker, and nobody needs to tell him how to do anything.”

From pulling out trapped rigs, to building a rink for an hockey fundraiser and helping the community of Mud Lake after a flood or revitalizing an abandoned antique snow bus – there is not job that Baikie, Webber and the rest of the crew won’t take on.

Webber and Baikie’s relationship works out well on screen and off, as the two have been side by side since they were kids.

“My favourite memory is when Corey and I were young and we used to work in the shed. We took skidoos with different engines and put in different bodies to make machines. We called one the Yamadoodleyaris, “ recalled the owner. “That for me was a lot of fun. We have been doing it since we were kids. Trying the throttle on it with tape or rope and see what happens. For me that brings back some of the greatest memories.”

Both Webber and Baikie are thankful to the community and fans for their ongoing support and are excited to keep sharing many adventures to come. No challenge is too big, they always manage to get it done – which is something they want their viewers to consider in their everyday lives as well.

“It doesn’t matter where you come from or what you have been through in all your life, if you put your mind to it, you can do anything. You can achieve anything,” said Baikie.  “That is what I see with this show and it shows the viewers that anything is possible. We get people come in, it could be any scale of the spectrum. People who have nothing and people who have everything. We find a way to get it done, no matter what, we always make it work.”

Really have a great time watching the Last Stop Garage. I live in Arlington Texas and hope you guys all the best. 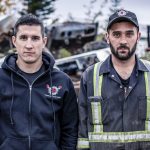