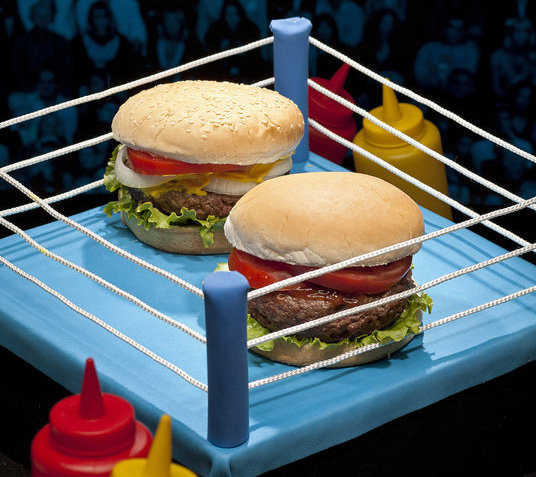 As I wrote last month, The Overcast had sponsored The St. John’s Burger Battle, a month long event featuring fifteen restaurants serving up their own version of a burger with the winner being crowned at the end of February. Like the 2016 Poutine Challenge and 2016 Mac and Cheese Showdown, I took part in the St. John’s Burger Battle. I have previously written articles plugging the event and then followed them up with a write-up and review of the dishes I tried.

This time around, I only managed to try three out of the fifteen burgers. This is a personal worst for me out of these three events. Unlike the last two events, I DID remember to vote for my choice to win the St. John’s Burger Battle.

Here are the burgers that I did manage to try and what I thought of them: 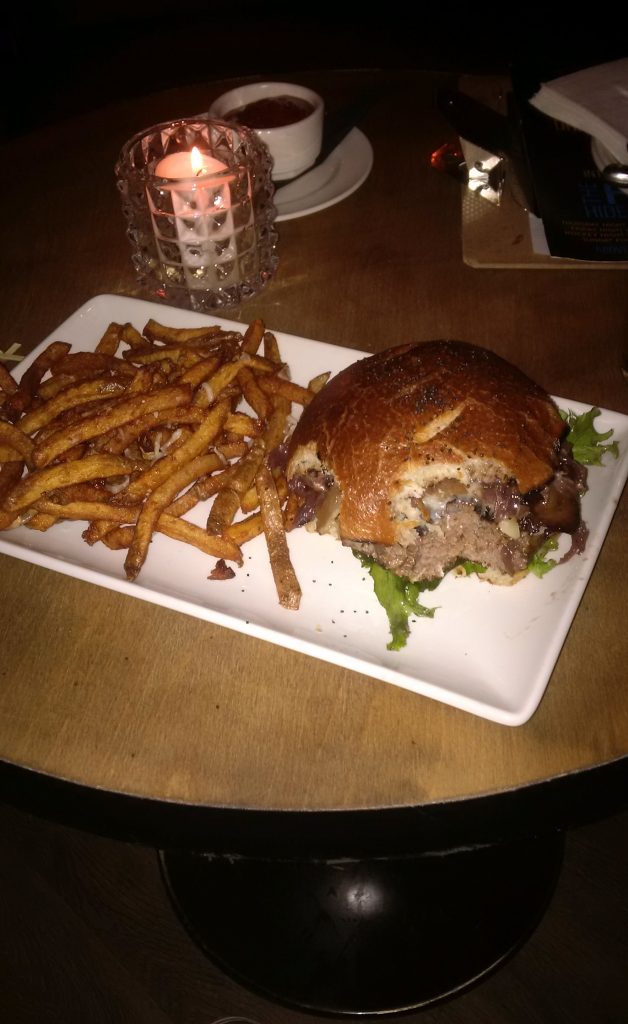 The Local Beef Burger lived up to its name in that it featured locally sourced beef and a brioche bun made by Rocket Bakery. It also featured gruyere cheese, house cured bacon, red onion jam, and burger aioli. The beef was super tasty and automatically made it stand apart from a burger you might get at a cheaper price. What made this dish well worth the price though was the house made bistro fries, tossed in truffle oil, and topped with parmesan cheese. I was so impressed with these fries.

The Local Beef Burger cost $18 which I thought was pretty affordable. (My apologies for the fact that there is a bite taken out of the burger in this picture. I promise it wasn’t served that way). 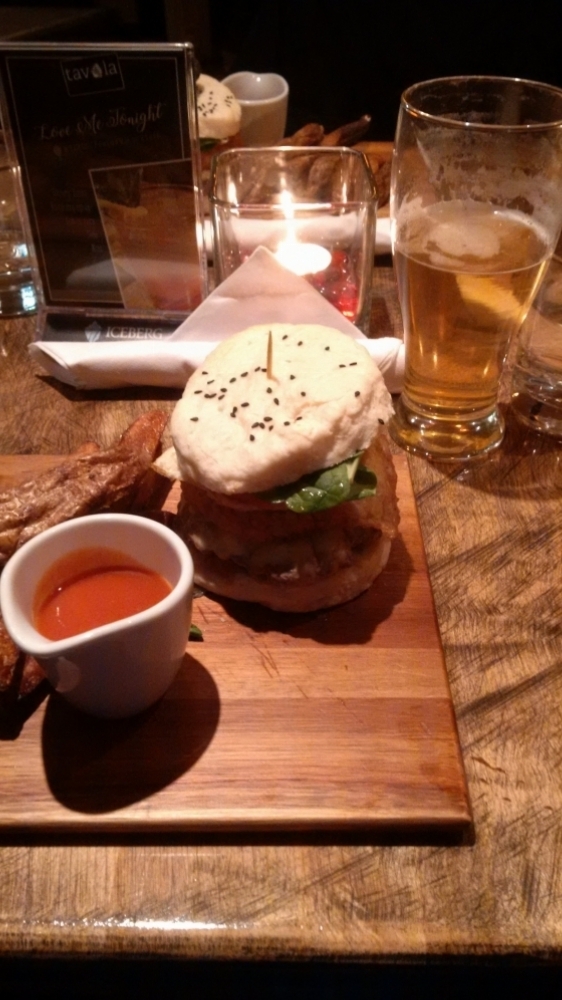 The place where my “food openness odyssey” started with the first poutine of the 2016 challenge, Tavola served up House Beef on Buttermilk Buns. This burger had house-ground beef with 5 Brothers Pepper Jack Cheese, an onion ring, bacon jam, fried tomatoes, cider & mustard aioli, all garnished with fresh arugula and a fried egg. This is all well and good but what made this burger stand out was that all that goodness was in between a buttermilk biscuit. The burger was served with a side of wedges and house made ketchup. Unfortunately the wedges lacked some flavor but the ketchup made up for it.

The House Beef on Buttermilk Buns cost $19. I felt it was a bit hard to eat because the bun wasn’t very strong and the burger was pretty jam packed so I had to be super boujee and eat it with a fork and knife. 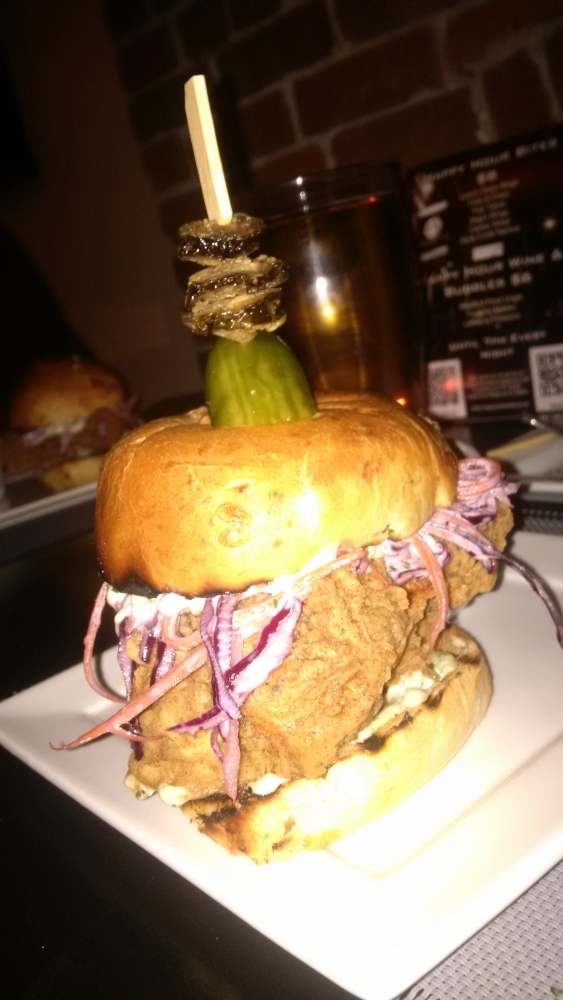 Up until very recently, this burger would have been the only one I would have been willing to try as I didn’t eat much beef (and clearly didn’t know what I was missing). Chicken is still my go to so I was very excited to try The Kickin’ Chicken Burger. Billed as “[d]eep fried Texas pounded chicken, [with] crispy house ranch slaw, house pickles, jalapeno [on a] cheddar bun” this had “Kris” written all over it. The burger was $13.95 which made it well worth the cost but did not come with a side. It was also served with a barbecue sauce dip.

Sadly the burger did not live up to its name. There wasn’t much “kickin’” about it as the sauce didn’t have much flavor and I couldn’t taste any jalapeno in the bun. The chicken however was amazing though. I’d love to see them use this in another burger with some more intense flavor.

As I said, I didn’t get to try many of the contenders and the ones I did try were good but neither of them was outstanding. I started out the month excited to try as many as possible but the weather and a lack of funds put a damper on that. Also, I couldn’t help but have a bad taste in my mouth from the fact that this Battle wasn’t supporting a local charity like previous ones I have written about.

Of the three burgers I did manage to try, there wasn’t really one that I would have had to try again. This time around I did manage to remember to vote for my choice though. I ended up going with the Local Beef Burger from The Fifth Ticket. It was a tasty burger but it definitely had the best side. Seriously. Go try those fries.

According to The Overcast’s website, the people of St. John’s chose The Merchant Tavern’s “Merchant Burger” as the winner. (I did want to try this one for the double smoked bacon). The editor chose the burger at Cinched Bistro and the critics decided that Seto Kitchen + Bar’s “Wagyu Burger with Seto Sauce” should be the Burger Battle Champ.

I reached out to The Overcast to see who won the $50 Piatto gift card but they have not responded to me.

[…] be a Port Rexton Brewery T-Rex Porter and a poutine from The Fifth Ticket (who was my choice to win The St. John’s Burger Battle) or one of Mill Street’s local Newfoundland brews and their poutine made with stout […]

[…] was my choice for Burger Battle winner last year and I’ve to say this would be my burger of choice if ever I’m craving a burger and a beer. Tint […] 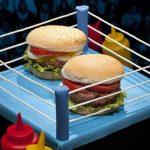