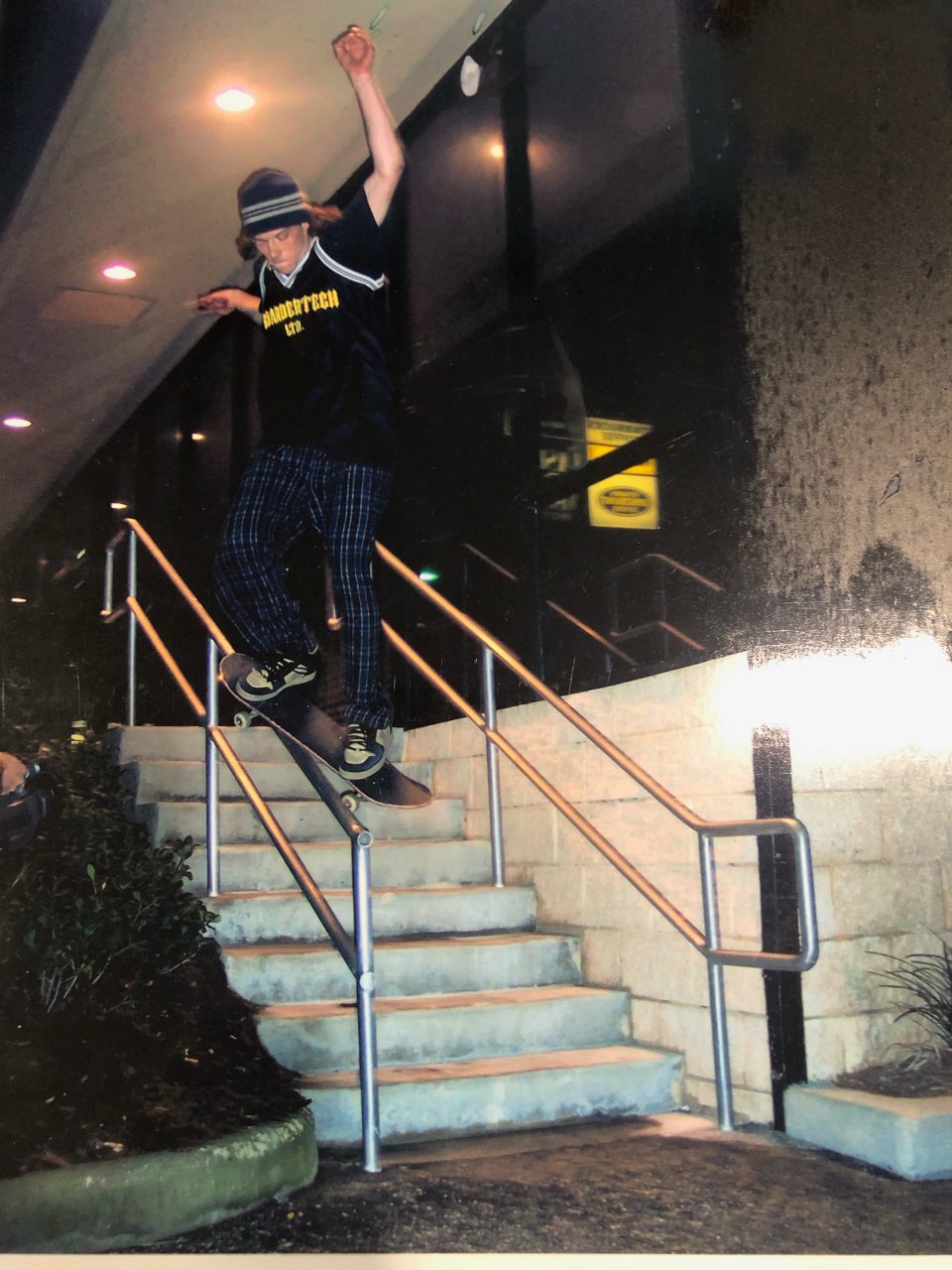 One of the dominant skateboarding scenes in Newfoundland and Labrador during the 1990s was none other than Gander. Located in the centre of the island, Gander is best known for its small international airport that was a safe haven for travelers on September 11, 2001.

Long before that historic day, the few parking lots of Gander were filled with skateboarders during the after school hours. Nowadays, if you roamed the streets, it wouldn’t be obvious that the town was known for skating. But back then, skateboarding was everywhere. And it wasn’t just a ‘sport’, but rather an odd counterculture activity that was weirdly associated with rebellion. Those who were a part of that culture, found it to be a whole new form of community.

Ganderite, Matt Lane remembers exactly how it made him feel.

“I had tried gymnastics, badminton, baseball, basketball, and hockey. I had fun, but there was no real freedom. It also felt like when the game was over, it was done until the next game or practice,” said the skater. “You never brought it home with you, at least that was my feeling about it. When I started skateboarding, it was the opposite, it was also at a time in life where I was exploring who I was and where I ‘fit’ in the world. So skateboarding allowed me to take that journey to the fullest extent.”

Skateboarding managed to transcend the classification and categorization of high school popularity. Once you hit the pavement, everyone was on a level playing field. While teenagers are trying to identify who they truly are, skating allowed them to discover themselves in a new way.

When Lane first saw a group of skaters gathered at the Gander Law courts parking lot,  he was hesitant to find out what it was about. But his friend Steve wanted them to check it out.

“My first time meeting the culture, I still remember very clearly. I’ll never forget that moment as that was the moment that changed my whole life. I was with a friend who had also started skateboarding. I was a ‘loser’ at the time, for lack of a better way to describe it in the 90s. I got beat up by people at school, made fun of every day for the dumbest of things and I was just never finding my place, no matter how I tried,” said Lane. “That all changed in an instant. I did not want to go over, as my experience with most people at that point in my life was generally not good. I had friends, but going to school and coming home kind of sucked. The moment we rolled into the law courts that night we were not asked what did we like, what did we do, was I cool, who did I know? Nothing like that, I was just asked what my name was and then was accepted in the group and treated as if I have been there all along. Always having an individual opinion or way of acting that was accepted because we knew that we all had the same vibe. ”

“From that moment, skateboarding was never a pastime for me, it became a lifestyle. “

Becoming a part of skateboarding created a community, a space for everyone to come together and fight for the right to skate, to learn from one another, and work together. It didn’t label people for their past, or how they were viewed previous to entering the community – it just existed as is, without a need to clarify if you belonged or not.

“From that moment, skateboarding was never a pastime for me, it became a lifestyle. A part of who I became, a place where you always had a friend, always knew there was someone to hang out with and learn from, someone with a similar attitude or personality. You see, you didn’t need to have the same interests because we all had the same lifestyle and ideals which were independent of each other but still part of the group. This really helped me grow and figure out who I was without being judged or beaten up. Sure, we would all make fun of each other, but it was different. It was done as entertainment, as a positive. Basically, making fun without intent to hurt, which made us feel like family.”

In the mid-90s when skateboarding started to gain popularity across Newfoundland, there was also a small stand against it. Slowly some storefront windows had “no skateboarding signs” displayed, and skaters were running into blockades when they took their boards out. They found space in parking lots or back alleys, or stairwells – but they needed somewhere permanent.

Skaters just wanted and needed space to do their thing. Eventually, a skatepark was built on Memorial Drive, across from Sharky’s (that served mad delicious – yet terribly unhealthy fries, dressing and gravy), next door to that was Powell’s Supermarket, the perfect space to drop the last bit of pocket change from your allowance on jawbreakers. Right outside Powell’s entrance was a payphone that was mainly used by teens calling their parents collect to ask for a ride home.

Though he doesn’t remember his name, Lane accredits the creation of the original skate park to one person: a city worker with a pet duck who built the park.

“He was dedicated to helping the community as most were in Gander because of the sense of community there, especially in the 90s.”

During the Festival of Flight, a week of celebrations in Gander, there was a skateboarding competition. Skaters came from all over the province for this day-long event, which for a short time was legendary.

The skate park in Gander no longer resides on Memorial drive and none of those buildings stand there any longer, but Lane remembers certain places being a source of support.

“Growing up in Gander for a skateboarder or anyone in that culture, because you did not need to skateboard to be a part of that lifestyle – as it was a feeling and a way of thinking, it was different than growing up in Gander. As I said, kids can be cruel and this was not my first taste of being included. The more I accepted the lifestyle it seemed the more everyone accepted me. Growing up in Gander in the 90s was a huge reason why I had success over the years. I learned that people are real, they are individuals. We had so much support with local businesses like the Home Entertainment video store that always let us skateboard for hours in front doing tricks, into the street without the worry of traffic.”

The skateboarding industry has changed since then. Teens are no longer gathering in their parents’ basement to watch grainy VHS tapes of one another doing tricks, they aren’t fighting for space in the streets or hovering on the outskirts of culture. It was an iconic time that led to what skateboarding is today: a huge industry with recognition as a valid and exceptional sport.

“A lot has happened in the community, the level at which the commercially driven industry to be the best has done exactly what it set out to do. With the drive for companies to get the best skateboarders to sell their product, they have raised the bar,” explained the skater. “Each time the bar has been raised on talent and tricks being done, that becomes the new normal and now it’s no longer looked at as something special, as we always strive to be creative and the best at something because that passion to get there is driven by the determination to be accepted and make something out of this sport you love.”

Skateboarding has reached levels of acceptance and normalcy, that people have become desensitized to understanding what consists of a hard trick because every generation brings every move up another level, said Lane.  Plus, with social media and the internet – skate videos and content are so easy to come by now.

“The good thing is to remember that even though the skateboarding world has grown to a monster. It still has a great heart that is born of great culture and acceptance. As much as it changes on the outside the inside will always be a place for everyone even if the big companies are playing the game.”

Wow, this is a great throwback. I remember being an awkward pre-teen looking in slack jawed admiration of the skaters in Gander. If I recall correctly, the first competition was behind the arts and culture centre (before the new arena was built), and consisted of a small ramp and 3 stairs. The last one was many years later, inside that newly built arena, and was more akin to an actual indoor skate park. My band played during the trick competition and it felt like we were part of something very special. Thanks for helping me remember that 🙂

This is my dad Clane Moss! We had a pet duck and he started to build it in our backyard!
My dad is one of the most incredible people I know! 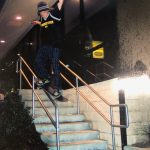