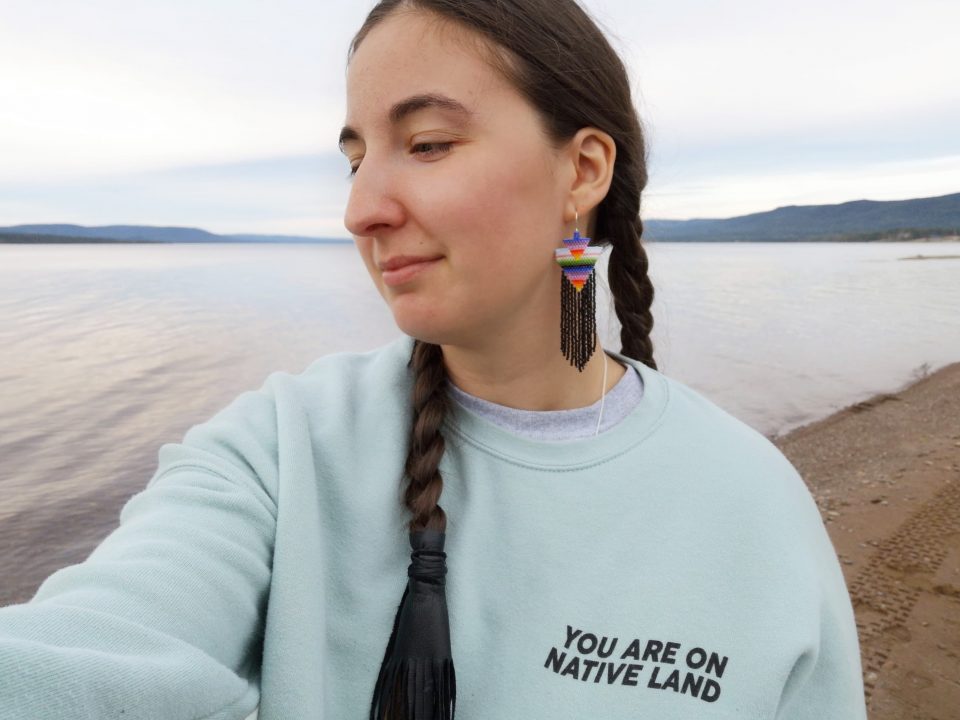 Alex Antle always knew she had an artistic side, but it wasn’t until the last year of her Bachelor of Commerce program that she found beading, a hobby which has now turned into a small business and put her on the map as an “emerging artist.”

“I had been away from [Grand Falls-Windsor] for five years and I was feeling super disconnected from my home and my family and my culture, so I was just thinking of ways I could make myself feel better and make myself feel more connected to Mi’kmaq culture,” she said.

Beadwork was the first thing that came to mind, and despite a period of trial and error, she quickly knew it would be her medium. She first tried learning from a book, but it was difficult to fully grasp the technique without seeing how it was done. Her skills really took off once she started learning YouTube videos. Now, three years later, her work has been shown in exhibits at Eastern Edge, Admiralty House, and the Craft Council of Newfoundland and Labrador.

Emily Critch, a freelance curator who organized the mitsujuk | kussikuashu | kpitni’sewet | they sew exhibition at the Craft Council, reached out after seeing some of the earrings Antle made and asked if she would be interested in trying something totally different. Antle submitted earrings, a loom piece, and an applique piece titled “Mekwe’k,” meaning “Red,” featuring someone wearing a red dress in remembrance and celebration of Indigenous women.

“The name of the colour on the beads [in the background] is aurora borealis, so in my mind, that’s a night sky with the northern lights. The purpose is this person looking in the night sky, and the red dress is a symbol of Missing and Murdered Indigenous Women and Girls (MMIWG). I want to draw attention to the national issue of MMIWG while at the same time celebrating their lives and looking towards a positive future for Indigenous women.”

Beading was initially something Antle focused on just for herself, and she shared photos with her network because she was proud of what she was creating. She then decided to create separate social channels under the name Bunchberry Beadwork, and followers started asking her if they could buy her work. A small business grew from there, and she now finds herself weighing the pros and cons of distribution channels and looking for ways to meet the demand for her pieces. She estimates it takes between three and ten hours to make a pair of earrings, and while she wants to continue to make wearable art accessible to everyone, she’s also conscious of making time to make more large pieces and be involved with more exhibitions.

The name “Bunchberry” comes from the plant which is used in traditional Mi’kmaq medicine, connecting the healing side of the artform to the natural elements around her that inspire her designs.

She said, “The way I do it with the intent of connecting myself with my culture makes it healing. I’m beading, but I’m also feeling connected to my ancestors and my home territory.”

In the beginning, Antle took custom orders and made whatever her customers asked for, but now as a more skilled artist, she is moving toward a more creative process.

“I’ll just pick out some colours of what I’m feeling and I’ll just go. I don’t even create patterns. I just make it. That sometimes works out and sometimes it doesn’t,” she said. “I do prefer things to be one of a kind, not only because I want them to be special, but it’s a whole creative process when you’re making something and you don’t know what it’s going to be. If I make them again, then I have to follow the pattern I made before and I’m not being creative, I’m just being tedious.”

Antle uses an app called L’nui’suti to give her pieces Mi’kmaq names as another intentional step toward preserving her culture.

“I’m not a Mi’kmaq speaker and I know very little myself, but I use beadwork as a way to connect to my culture, and language is such a strong part of culture. We have lost it a lot here in Newfoundland, so it’s another attempt at connecting in the slightest way with the language and trying to bring it back a little bit,” she said. “I know naming an earring after something isn’t doing a whole lot, but having that representation, seeing it, and knowing those words and that language is still very much alive even if it’s not here, lets people see it and know it exists.”

While she is well-known for her earrings, Antle has worked on belts, bags, hats, and even pop sockets. Her work merges traditional techniques with modern designs and purposes to move the traditions forward in subtle ways. She says she has been asked if wearing her pieces could be seen as a form of cultural appropriation. Her opinion is if an artist or craftsperson is willing to sell you their work, it’s ok for you to wear it, but she recommends staying away from mass market items found in big corporate chains.

“Everyone should have it. If you know the person is Indigenous and they’re willing to sell it, then it’s their choice of whether or not they want other people to wear it. In terms of jewelry, there’s not really anything that I wouldn’t just sell to anyone, and I would rather people buy beadwork from an Indigenous artist rather than a store somewhere when you don’t know where it came from or who made it. As long as you know you’re supporting the authentic artist and their real work, it’s for everybody to wear,” she said.

Over the last year, Antle has been invited to host beading workshops around the province. Her first group was in Gander, and the community has continued to grow and offer workshops of their own.

Antle herself is a member of the weekly Elmastukwek (Bay of Islands) Beading Group in Corner Brook. The group offers an opportunity for beaders to connect, show off their work, and learn from one another. Organizer Carrie Lynn Brake, the artist who beaded the eagle feathers presented to the provincial courts last year, teaches the members new stitches or techniques. Antle credits Brake and Nicole Traverse as two of the biggest inspirations and resources for her as she continues to learn her craft.

“Mekwe’k” is currently being shown in Corner Brook at the mitsujuk | kussikuashu | kpitni’sewet | they sew exhibition is featured at the Tina Dolter Gallery in the Rotary Arts Centre. 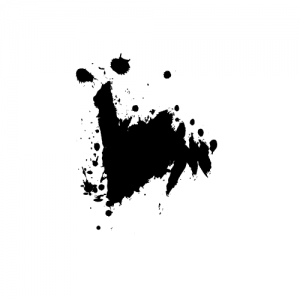 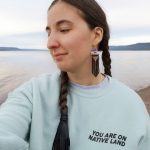