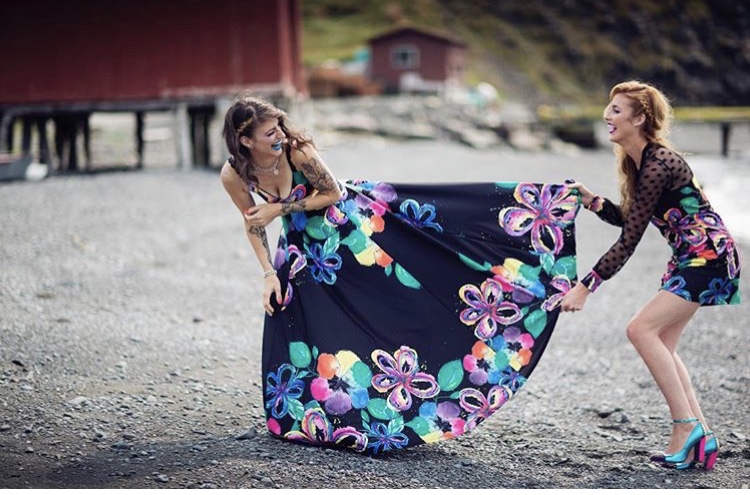 A lot can be said about MJ Couch: she’s a Newfoundland clothing designer from Deer Lake, mom of two, wife, entrepreneur, and hilarious interviewee, to name a few.

No matter what capacity in which she’s considered, it’s always draped in bright colour, energy, creativity and happiness. 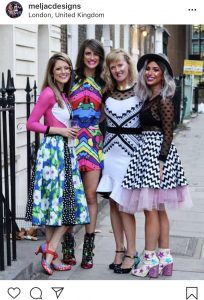 While speaking with MJ on the phone, she was multitasking like a boss, hand sewing and chatting away as if she wasn’t a Newfoundland Fashion Designer superstar.

In the beginning, MJ was a primary teacher who sewed for something to do.

“I used to make clothing with my mom and it went from there. While teaching in Trout River, all I had was thread and scissors and I got into it,” said MJ of her beginning. “I used to cut out on my living room floor.”

What started as a pastime, has grown into a colourful success. Through the jiggs and the reels, Melanie Jacqueline opened a walk-in studio in 2011 in St. John’s.

Her pieces are unique brightly coloured works of art that bring its wearers immediate happiness when adorned. That’s a bold statement, but there’s no way you could slip into a Melanie Jacqueline piece and walk the streets upset about it.

Each piece is a comfortable, beautiful piece of art that is fun.

MJ’s designs have grabbed global attention, including a write up in Vogue. The famous fashion magazine reached out to MJ last year to her surprise.

“It’s pretty wild,” said MJ of the exposure. “I got this email with a big Vogue header and it’s been very surreal.”

Through all the colour, and all the success, MJ has remained humble, thankful and truly genuine. Actually, mid convo she asked her assistant for a “thimble like nan here now,” exposing her authenticity.

MJ and her team have been a non-stop traveling force over the last year, featuring designs across international runways.

Melanie Jacqueline has been featured as a part of the Oxford Fashion Studio runway show during New York Fashion Week. While, MJ and her team recently returned from London Fashion Week and she is heading to Atlantic Fashion Week this month.

“I’m excited to represent on home soil. The show will have all our spring/ summer pieces. It’s fun to have new pieces to show,” said the designer.

While MJ started out small, her pieces have since become recognizable.  The locally made pieces flood social media and the streets of Newfoundland from multicoloured dresses to bold black and white prints.

“I think my stuff has a feel and vibe. Each piece has my voice. I was once called the Rainbow Tornado and I hung onto that,” she said. 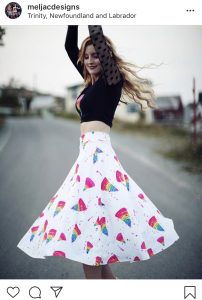 The Rainbow Tornado is now intertwined into her pieces. Melanie Jacqueline worked directly with Sara Dillon of SJ Artworks, a local artist,  to create unique fabrics and drawings, including the balloon girl inspired by a photo of MJ. 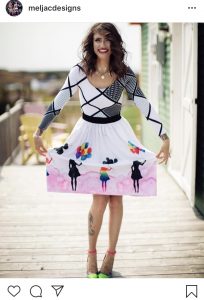 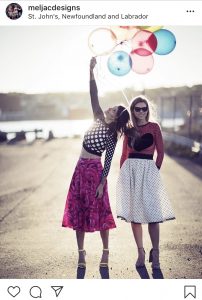 MJ also creates some fabric designs herself with sharpies and bold colours based on “everything I love,” she said.

All pieces are distinct and personal while making a statement. 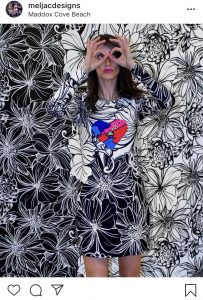 MJ’s husband Darryl Couch then created the fabric layout and design, a man whom she refers to as a superhero numerous times throughout our conversation.

“My husband spent hours working on the layout of the fabric designs. It was quite a process but the end result is incredible,” said MJ.

For a burst of energy and to wrap yourself in happiness, visit Melanie Jacqueline and check out the clothing line’s instagram @meljacdesigns 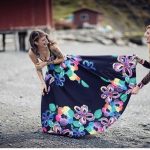